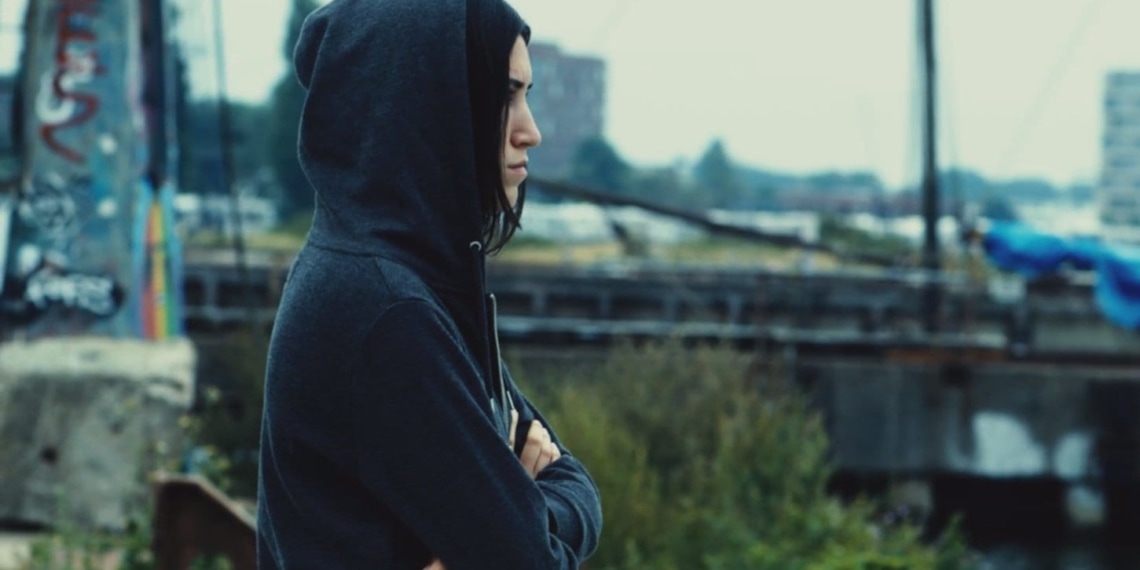 Crimes against women get reported daily. Too many shorts have already explored its reportage. But what about those whose cases have gone unheard? The ones that are still silently suffering from the unspeakable trauma they endured? As poignant as this topic is, and as easily considered for filmmaking, it’s almost rare that the subject is authentically portrayed or given its due attention. In Harvey Kadijk’s Dion, not only is this theme explored cinematically, but also realistically.

Melisa Alkanlar is Dion, a 20-something university student whose life is stunted due to an event that occurred when she was just 14. Cinematographer Luciano Simula pulls us into Dion’s world right from the word go; a world that doesn’t let her have a sigh of relief, a world that keeps her on the edge and a world that is as unforgiving as the occurrences of that night that shaped her into the adult she has become today. The camera lingers close to her, a tad too close for comfort, but that’s the intent, to make it stifling and claustrophobic as it would be for Dion to simply exist. We see her wake up to panic attacks, scrub herself raw, the bloodstains on her fingertips and abject fear in her eyes, all the telltale signs of a person traumatised, tangible for us to breathe in.

Alkanlar who plays the titular role has an incredible material to work on. These are the coveted projects that help actors challenge themselves, for, in Dion, there are almost no dialogues, no ensemble cast, no dramatic scenes, because everything is internalised, everything is private. And Alkanlar’s success lies in making it visible for her audience.

Additionally, to make Dion’s pain and haunting fear reach the audience, what writers Harvey Kadijk and Jolijn van Dulken do is create instances to show Dion in the environment that she finds threatening, misunderstanding and uncomfortable. Be it the nameless professor whose paper she steadily does badly in or the batchmate who waits for the slightest excuse to bully her, or worse, we feel the angst, the open vulnerability and the defencelessness of her current being.

Another influencing factor in Dion is its storyline. Director Kadijk uses the back and forth style of narration and sets it against the monochrome backdrop to recount the unfortunate events. The effect is arresting. The 14-year-old Dion played by Romy Blom looks remarkably similar to Alkanlar who plays the grown-up victim (thumbs up to the casting), making it doubly effective. As the shots intercut between the two, the look is unmistakable, the hurt visible.

Music is sparingly used in Dion. The silences are filled with either sobs or angst and just when it becomes unbearable to take it anymore, Dion dials a number; a muffled sob and a faint whisper later the credits roll, offering no respite, but a bleak sense of hope. Kadijk’s Dion is a gut-wrenching and a discomforting experience, but beyond that, it’s also the kind that evokes a deep sense of empathy for the countless still suffering from the shadows of a past that they had no control over.