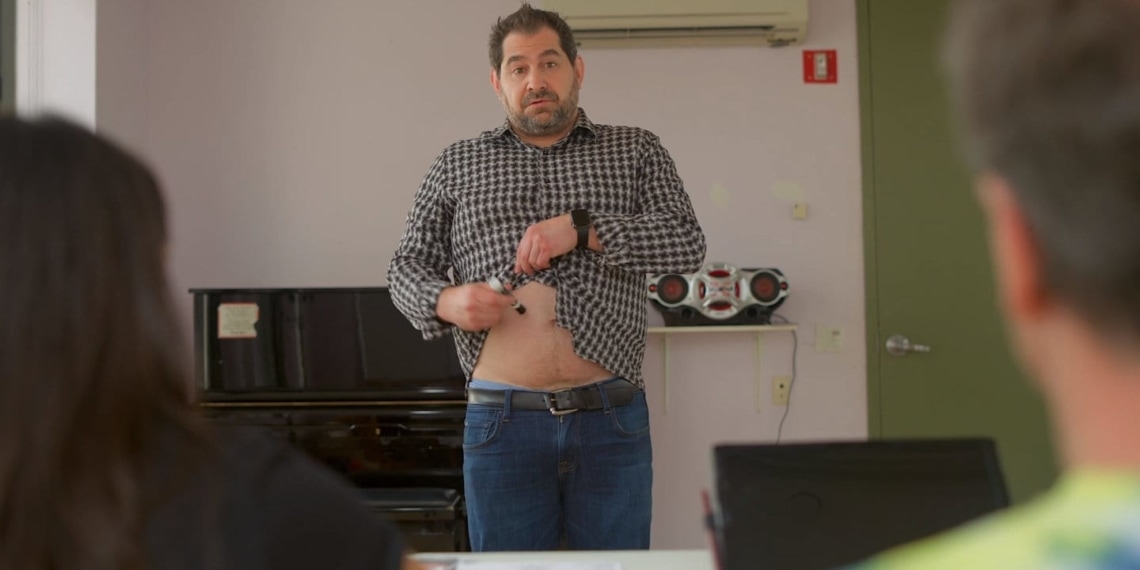 Eli has a lot on his plate; a fumbling career, a blubbering agent, an ex-wife who is soon-to-be-married and a daughter whose heart needs to be won over, every day. As if these weren’t alone enough, writer Ken Perlstein makes Eli a recovering alcoholic. If you thought these were too many facets for a singular character to take on, you’d be in for a happy surprise with the pilot episode of Director Colleen Davie Janes’s How Am I Doing? which at 23:28-minutes does precisely that and yet leaves enough to look forward to. The first instalment of an upcoming series, How Am I Doing? not only nails it with its characters and premise but even its title.

It’s a sunny day in New York City and we trace our character, Eli, played by the affable Perlstein on his way to his daughter’s school. It’s almost immediately that we are introduced to his nemesis, Nick Pappos (Anthony Robert Grasso) a.k.a Dr Ventricle, who on Parents Career Day at school elucidates Becka’s classmates of his job. Not to be left out, Eli convinces the teacher to leave him a spot. Perlstein makes Eli unmistakably likeable. Despite knowing that he is irresponsible and juvenile in his actions, we like him, almost instantly. Words are exchanged almost as quickly as he gets to the centre-stage and the premise is established – Eli needs others’ help as much as others need his.

Ronda (Amanda Brooke Lerner) who plays the ex-wife remains the soundboard to Nick’s vent on Eli and in the middle of all this, is Becka whose love for her dad and space in the new, soon-to-be-a-family at home situation finds a highlight. Eli remains the central character around whom the plot revolves. From his Alcoholics Anonymous meeting to talk with his agent, we see in him the guy who has grown comfortable with his own failed image – it’s a sad thought, but one that’s presented with a vague sense of charm.

Too many characters packed in with several parallel stories and all entwined around Eli and his relationships, regardless of their nature in his life might make How Am I Doing? seem a tad bit difficult to fully comprehend or enjoy, but to give credit where it’s due, Perlstein is convincing. Add to that, Toru Nishikubo’s lensing, particularly in scenes like the AA confession scene offer pleasant visual treats.

How Am I Doing? falls back safely on its characters. With a potential story to explore for each one of them, the pilot episode carries it with the hallmark of a promising series; after all, this one’s merely a piece of someone’s life, a life that has been lived, with all its triumphs and embarrassing falls. As Perlstein brings Eli to life, we wonder at when next he’d pull us into a guffaw. With much to look forward to in his life, the wait for the second episode can only seem thrilling.

Watch How Am I Doing? Web Series Trailer

'How Am I Doing?' is not yet available online for public 😕

Want to get notified when 'How Am I Doing?' is available online to watch?

Get a one time email and SMS when 'How Am I Doing?' is available online for the public. We will remove your data from our system once we sent out the notification. No Spam!