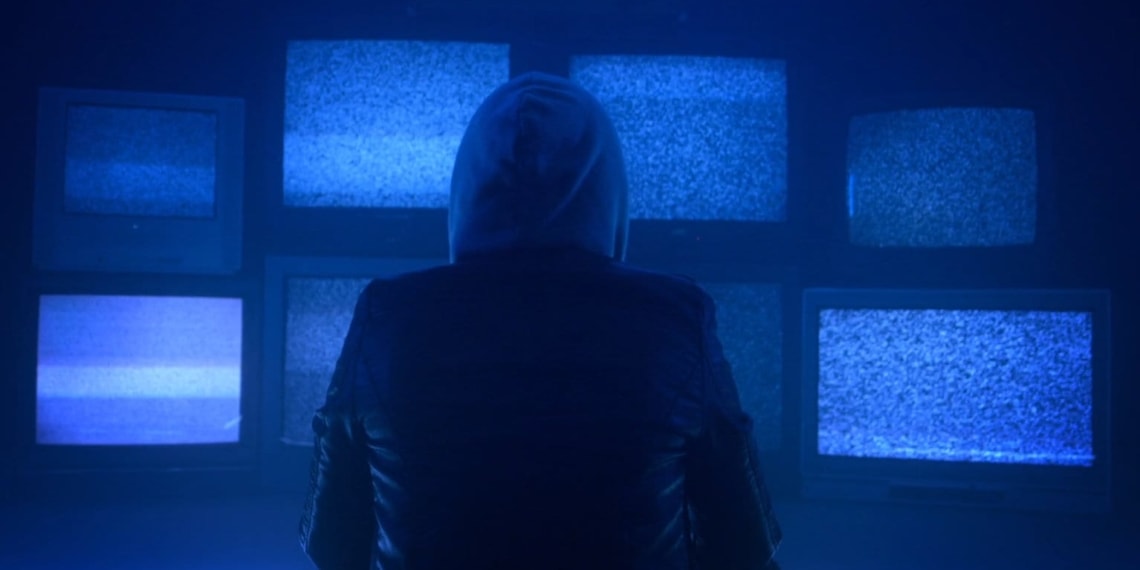 A sci-fi, Everything I Learned Came From The Television (EILCFTT) ensures its metaphorical nature is not lost on the audience. Jeremy Stewart’s 15-minute film focuses heavily on building on the idea of TVs and, by extension, media consumption being corruptive influences that can gain mastery over your intellectual autonomy.

Perhaps because of this, the film’s worldbuilding is kept to a minimum. A young woman (Hannah, played by Brittany Lynn Blanchard) – as minion of the machine overlords – mind-controls unsuspecting victims to either use as test subjects for a mysterious mission, or for her own personal interests; sometimes those interests are to browse books at libraries without interference. The other main character besides Hannah is her boss, known only as the Protector (Josh Wingate). The film begins with the two on the same side, progressing to develop Hannah’s character and eventual struggle for freedom.

It is the theme of power struggle that is significant to EILCFTT, allowing it to make do with barebones rules. In the absence of richer development, the plot can easily belong to any other world and setting, whether that is the mafia or a world of vampires. This makes for a screenplay that is not altogether compelling, but it is saved by the film’s craft.

Cinematography is particularly beautiful in its use of colour and lighting: rich warm shades of red and orange are used to portray Hannah’s “home” outside of the TV room, which is made of stacked columns of old-timey television sets bathed in blue, while the rest of the outside world is kept shadowy, especially because they are all seen at night. It is a crucial rule of the plot: you must be back before dawn (although the why is left unexplained). Neat framing creates a steadying sense of symmetry and precision (in contrast, the music is full of energy and controlled chaos).

Overall, Everything I Learned Came From The Television offers a fairly familiar story with detailed craft that enriches it to deliver an entertaining film with a fun final battle.

#ShortFilmReview: Everything I Learned Came From The Television: Do you watch TV or does the TV watch you? Click To Tweet

Watch Everything I Learned Came From The Television Short Film Trailer