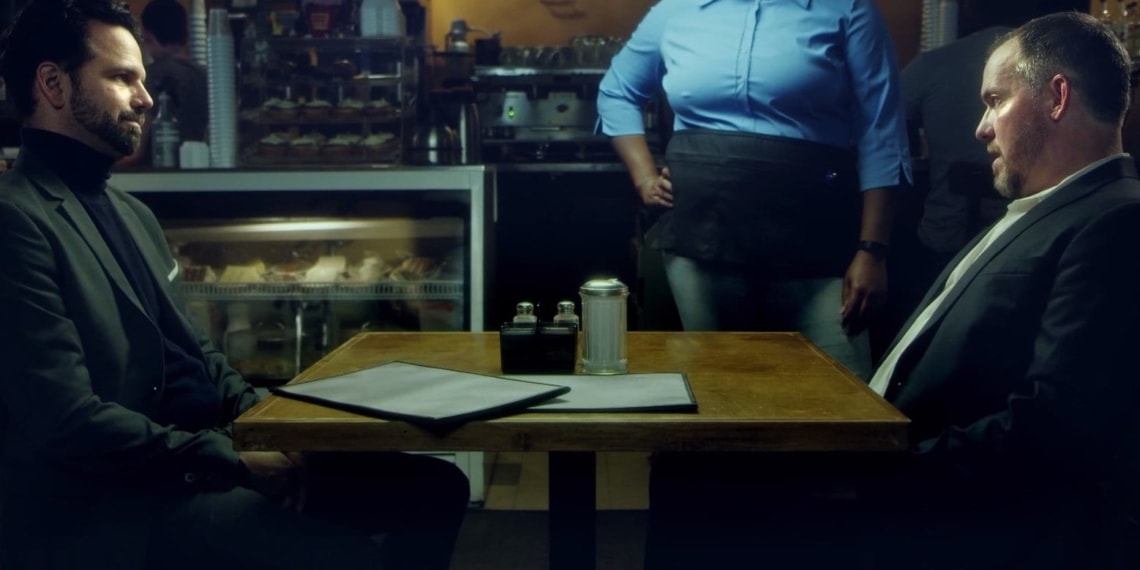 The clues that writer-director Holt Boggs plants in his nail-biting mob-drama-but-actually-a-comedy are placed so casually, you do not notice them at all until all the pieces have fallen into place. There is little that is spared from being turned upside down, the end result looking nothing like what you think it would be.

Perhaps the trick Crazy plays on its audience is to follow events that work just as well in two different narratives. It begins as a thriller, morphs into a comedy, and ends with a twist no one saw coming. Boggs plays Stanley, a mob boss dealing with the immediate aftermath of having a personal thorn picked out. Set in a shadowy diner, the majority of the film focuses on his conversation with the hit-man who did the picking, Monty (Brian Villalobos). Music tense, dialogues loaded, the film sets you up to anticipate a couple more deaths before the whole thing is over. While both performances are at par with one another, Villalobos owns the scene pre-reveal while it is Boggs who is compelling afterwards.

As the film transitions into its humorous tone using only its dialogues (everything else remains just as tense), the expectation of a death or two does not dissipate; instead, it only builds. At some point or the other, one anticipates, Stanley is going to shoot Monty for being such a loud personality. However, the concern of penis sizes is brought up about two-thirds into the film, fully transforming it into a comedy, expectations of gruesome, thrilling murder put to rest.

Crazy uses this style of teasing to make itself a peculiarly unique story – and a comedy. Taken apart and considered individually, the key components of Crazy aren’t new to either thrillers or comedies. Why it leaves an impression is the juxtaposition of these elements and their interaction with each other, making it multiple viewings’ worth of untangling and resultant appreciation.