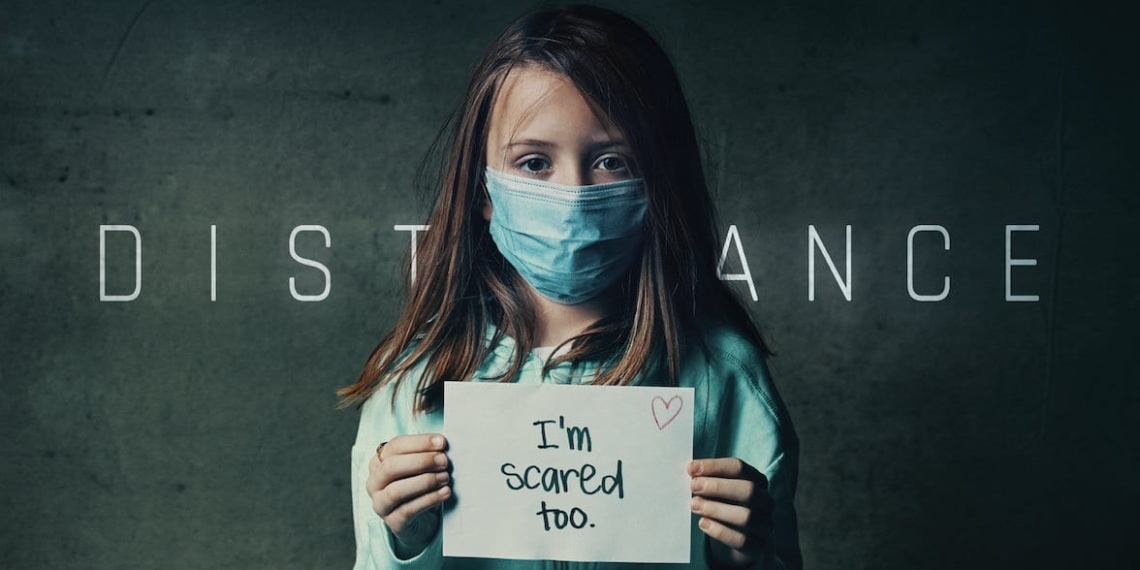 On the subject of COVID-19, during COVID-19 (production followed strict guidelines), it goes without saying that Jesse Edward’s Distance is a timely film. Which sometimes hits and sometimes misses, but that’s a story for another paragraph.

At the core of Jesse Edward’s Distance is the lemonade spirit, i.e., it turns gloom and even doom into an opportunity to bring people closer. The story runs in three parallel lines. On one, a family of four deals with the troubles of stocking up and losing income. Somewhere else, an old man contends with the loneliness of lost family and infection. And then there is a much younger one in his thirties, envelopéed by the cozy darkness of his house, absorbed in news. The film introduces all three storylines and the dizzying fear that they grapple with, with effortless storytelling resulting from excellent editing.

Little Josie serves as the catalyst for the plot, bringing together her scared, stressed family with a small act of reassurance: little hand-drawn messages. This is the only instance in the film that is a little too on the nose, a little too saccharine, but it moves on quickly from the inelegance. Sasha Sievers as Josie however, is surprisingly natural; perhaps the most natural in the family cast.

Norman, played by Patrick Higgs, is devastating in his buried sorrow. He grimly watches people buy towers of toilet paper (who would have thought that toilet paper could ignite such a poignant moment), refusing to reach out to his son. There is just a hint of artifice in Higgs’s performance, which unintentionally serves as a reminder to not get sucked into another fear-filled rabbit hole.

As the three separate plotlines advance, Josie and her family kick off a trip around the neighbourhood, leaving little messages of hope on every doorstep. This ultimately proves instrumental in furthering the plot, beyond its own inherent feel-good factor. The man in his closed-off home finds grace. Norman’s life is touched by love and humanity. And Josie’s family finds peace and reconnection.

The hope that Edward’s attempts to reintroduce into a grieving, scared world is well done after all, despite scattered hiccups, highlighting the enduring spirit of community even when distancing is the norm.