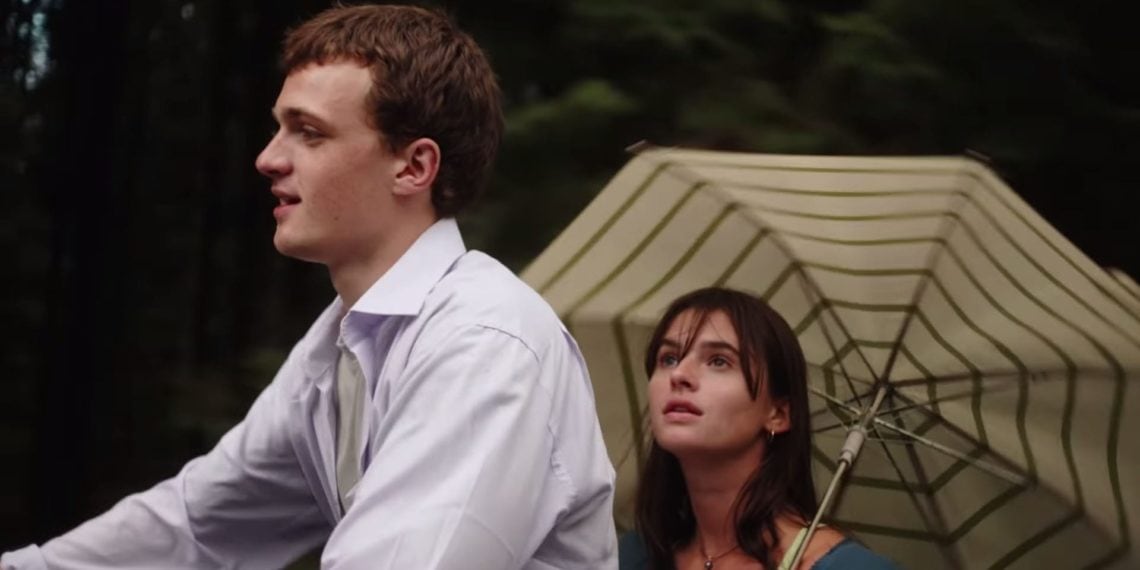 She is in search of something that would take her mind off of her bitter relationship with her mother. He, on the other hand, has a loving mother who ensures that he has somewhere to go to, every time he snaps hard. What could possibly be common between two young adults, seemingly opposite from one another in every way? What could possibly bind their story together? Director-Writer Jonas Risvig weaves a beautiful love-drama that brings hope and a tear or two in this new-age love story between two surprising individuals and their joyful discovery of themselves in each other’s company. We’re All Leaving is a 28:00 minutes long film on finding love, peace and the strength in saying goodbye to it all.

Jeppe is a 22-years old, autistic; working in Sejs Bakker Camping store in his birth town Silkeborg. His freckled face, ears that remain perpetually glued to his headset and eyes that refuse to make the connection despite the contact are all classic tell-tale signs of someone who’s different. As if Viktor Medom’s stellar acting wasn’t enough to convey this, Risvig opens the film to Jeppe’s mother having a word with the store worker who had upset Jeppe by disrupting his system shelf. Laura Bach who plays Mona is perhaps the best choice for Jeppe’s mother. Limited dialogues, limited screen time, but terrific screen presence and character absorption. From the tiniest gesture to subtlest glance, every withheld breath to resigned sigh, she owns it. She makes the role of an empathetic, concerned mother natural, effective, moving…

When Mynthe (Marie Bode) is introduced, it’s evident that she is to be the love interest of Jeppe, but it’s hard to sell. Not only are they poles apart in their characters and demeanour, but the cliché of a touring youngster falling for someone who works at the camping site is harder to root for. But to Risvig’s credit and the stellar cast and crew involved, Jeppe and Mynthe grow into you. There’s genuine warmth, bonding and enough thoughts exchanged to believe in something tender here.

Mathais Loose, whose tranquil composition stays throughout only helps add a sense of calm to an already steady-paced (editing by Jesper Bækdal) narrative. The music is as tempestuous as required, as soothing as would two, young lovers discovering the meaning of finding peace, understanding love and the fleeting moments of life would seem. Jonas Blond whose cinematography makes the serene location of Silkeborg in Denmark so idyllic requires special mentioning here. We see Jeppe and Mynthe go swimming, cycling along the bucolic track and staying indoors from the gloomy outdoors; add to that the underwater shots by Jan Bue Laumark make the moments between the lovers almost ethereal.

The meet-cute isn’t that elaborate or even striking, but it is effective. For a story that largely banks on two people’s eventual bonding, it was a risky move to not add a backstory to the lead pair. The writing leaves a lot to the imagination, especially of the characters’ past as focus is solely spent on once the bond is already established. Bode and Mesdom are brilliant. Their chemistry is natural, hence believable. Bode, in particular, gives a heartfelt performance, bringing forth Mynthe’s vulnerability, charm and innocence as opposed to Mesdom’s reserved, almost difficult demeanour. Even the supporting cast from Mynthe’s friends to the camping store worker, are near perfect.

Teenage and young-adult romance has its own charm, but to sensitively portray the angst, haphazard approach and eagerness of a blossoming love that is all too soon over requires a tender understanding of the frailties of the heart. What could two polar opposite individuals seek from one another? Risvig answers that and more in this unpredictable and yet sublime short on innocent hellos’ and wise goodbyes’.