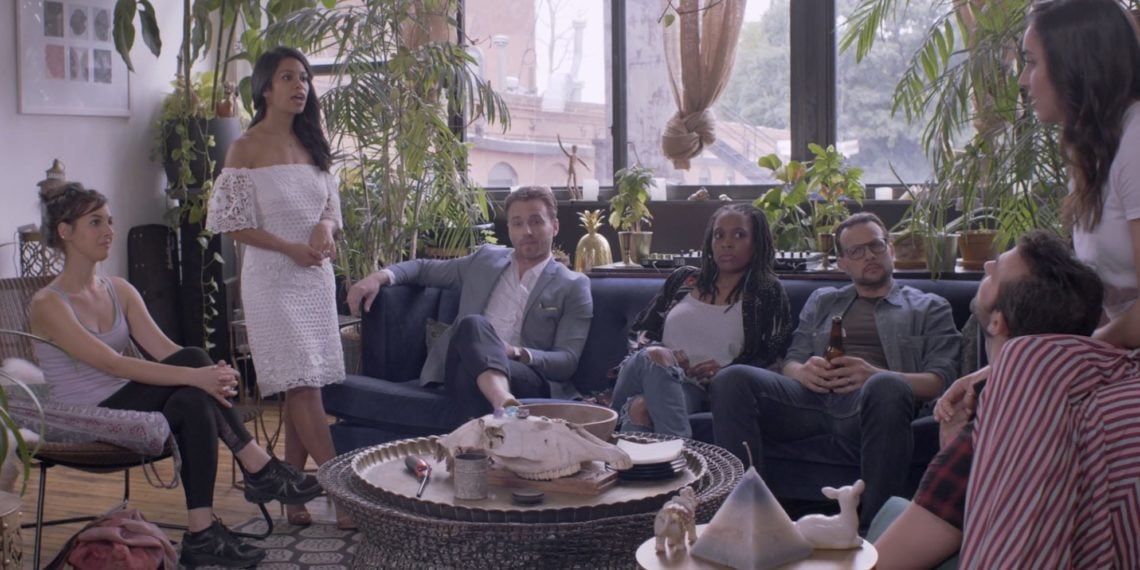 It is human nature itself to be conceited and self-obsessed while consistently attempting to outshine others, perhaps even obliterate their achievements in order to emerge superior. In his 22-minute short film Self Servers, Eliezer Vergara puts forth a clever satirical portrayal of the pomposity of people at a semi-formal soiree, turning the focus this time on millennial couples (therefore including the mandatory social media influencer).

The film begins with hosts Jackson (Aaron Badilla) and Emma (Lucia Sawh) making preparations for the get-together. Attending are their friends with their partners. Kim (Kezia Bernard-Nau) and Max (Jess Prichard), the vegans who practically hate each other. Tyler (Aaron Zapf) and Macy (Mackenzie Lesser-Roy), one a brewer of unsuccessful beers and another the social media influencer. Bringing up the rear, yoga loving Lauren (Dana Stern) and corporate man Will (Sam Ashdown). Everyone who isn’t flirting with someone, hates everyone else. Even the most ‘’normal’’ couple, Jackson and Emma, have their own misgivings and prejudices regarding their friends, frequently exchanging anxious glances or making comments.

The multi-hued palette of characters differ from each other on the surface, but beneath it all they are of the same colour. Dissatisfaction is a common trait and this helps create plenty of tension which Vergara pits then together their often clashing ideas, beliefs and ambitions. As the film progresses, relationships and intentions begin to go rogue.

Writing keeps things lighthearted; each comment adds to the tense atmosphere while also drawing laughs. The engaging screenplay draws attention to how each aims to draw attention to themselves and seek validation for their own choices, even as they present a front of being interested in the others around them. Underneath the simple plot and facade of civility, flows an undercurrent of incessant tension and arrogance.

Chris Ungco’s cinematography ingeniously records the reactions of those present as the comments lead up to a choking awkwardness and the ultimate truth-bombing climax. The light music (Dylan Glatthorn) complements the hilarious satire as it unfolds.

The film ends on a telling note: No matter how unlike each other in appearances, they all come with an inherent desire to reach for recognition, even in places that do not call for it. And that this has always been the case, regardless of eras.