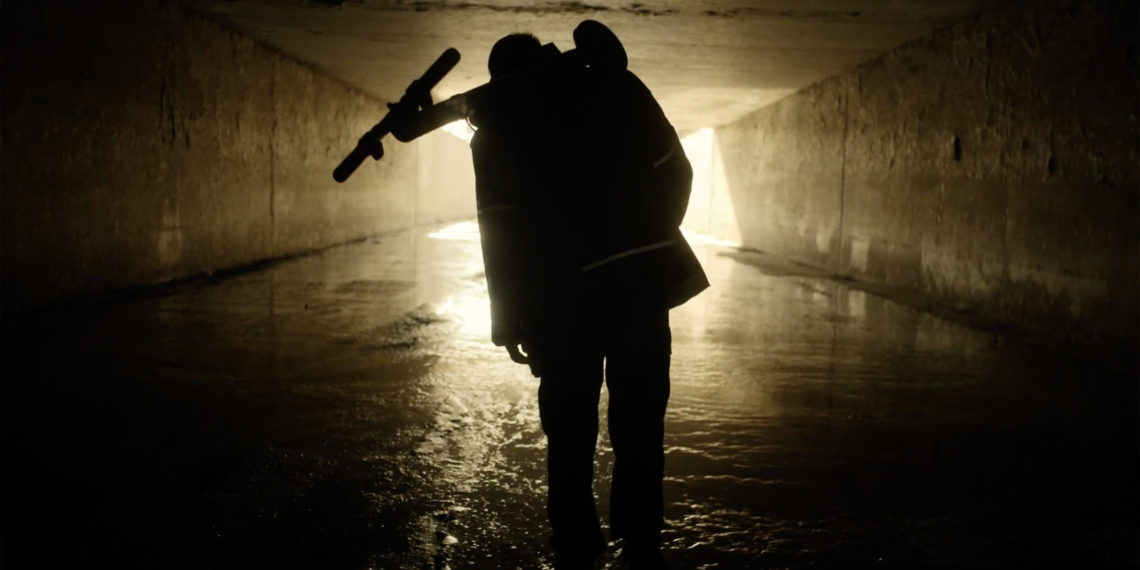 James (James Aaron Oliver) is an electric scooter collector in Los Angeles. His achingly lonely life is evident right from the opening shot. As the camera follows him around, we go about his routine as he does. The emptiness unbearable beyond a point, James is perhaps the silent voice to the countless battling depression amongst other mental issues. Writer-Director Mojean Aria’s Lucy is a 21:45 minutes’ long film on a surprising bond built between James and his newfound friend, Lucy.

That depression has found its own space in the cinema is well-known, from characters that undergo suicidal thoughts to those reeling under post-traumatic stress disorder, the film industry has given its due share to highlighting the pressing issues of the society. But what makes Aria’s Lucy standout amongst them all is the raw depiction of it. Without the melancholic music to accompany, the character backstory and dramatic lensing, the film is bare and in it comes out the sensitivity, the tenderness that otherwise couldn’t have been so well depicted.

James does his routine like the clockwork. Going to various desolate spots around the city, scouting and collecting the electric scooters. In the interim he also witnesses abuse, loneliness and grief – the point is made clear; he isn’t the only one suffering, the city is too. But he is helpless. Aria uses these characters in the periphery to drive James’s narrative forward. His helplessness accentuated, he is a broken man, unable to help himself or those around him. A chance encounter with an abandoned dog, Lucy brings about a new direction to his otherwise purposeless life.

Oliver is powerful. His screen presence, acting, timing is near perfect. Not a flaw can be found in his mannerisms or dialogue delivery. His tousled hair, the messy, unkept room and car, a reflection of his own clouded mind, he is so astounding in his performance that its hard to watch, its hard not to watch… When he is warned by his apartment owner (Mojean Aria, himself), to either set his papers right or get rid of the dog, the following scene is hard to watch, harder to digest. The remainder of the story is of how such a recently-formed relationship between a man who knowns nothing but isolation and a dog that’s perhaps known only abandonment forge into something that offers hope not only to James but also the audiences, at large.

Lucy doesn’t preach, doesn’t dictate sermons. It doesn’t even offer hope, to put it bluntly. What it does is hold the mirror to the society and people like James, the invisible ones, the suffering ones, the lost ones. When he answers what’s meant to be routine questions to Dr Delpiero (Armin Amiri), his reluctance, even anger at being prodded is evident, but nothing could prepare the audience for Oliver’s spectacular transition from the bitter man to a man, broken, broken in despair and burdened under life’s several beatings.

Etienne Aurelius’s cinematography deserves special mentioning as does everyone else involved with Lucy. The camera offering mostly handheld shots to oners is striking in its technique of staying both indoors and following James around. The vastness of the Los Angeles streets well-captured, the empty, littered streets a well throughout location selection, the cinematography complements James’s life; it is claustrophobic, at the same time isolating. Steven Argila’s music is barely there; used only in dramatic moments accentuating the tone of the film, while Chris Witt’s editing maintains the pace of the film, never letting it linger for too long in any shot.

Words fail when it comes to lauding Oliver for his portrayal of James. This one is best left to be devoured on screen. Now, if only there was a Lucy (Chombly) for every James…

#ShortFilmReview: Lucy: She found him when he needed her the most, and did something others didn't before. Click To Tweet