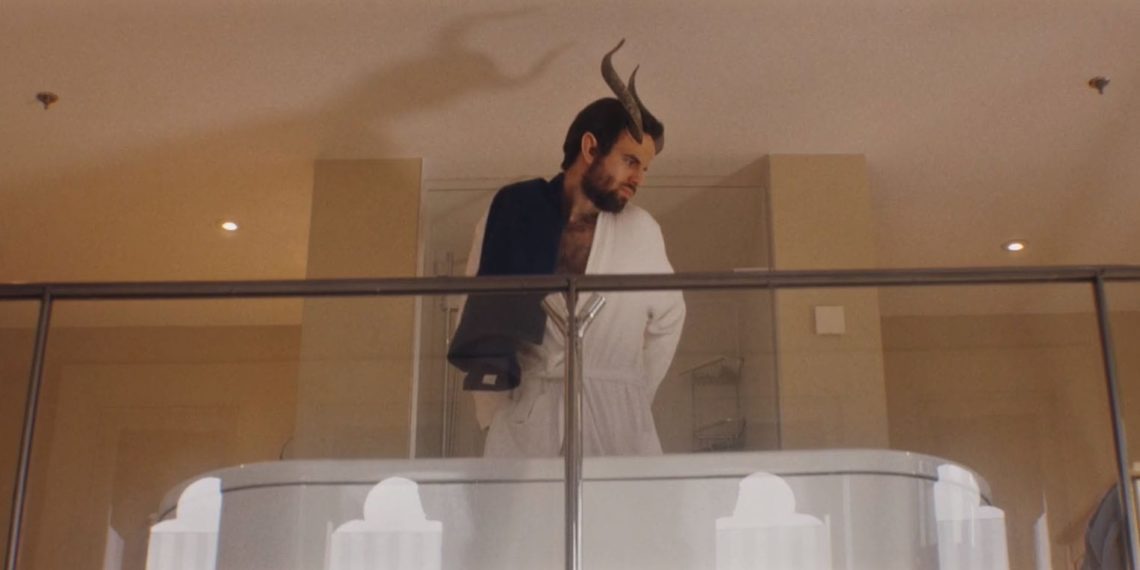 That he is undesirable to look at is known. That he gets the girl, in the end, is celebrated. And, that the curse is lifted gives us all the hope – that redemption can be sought, love can conquer it all and everyone deserves a second chance. So, what makes it so irresistible for us all to keep re-watching, re-making old classics? Their timelessness, supposedly.

Writer-Director Luke Howe’s The Beast is the modern-day fairytale of a hairy, horned beast and his journey to lifting the curse. Bad enough his appearances do not make life any easier for him, worse that he is the successful editor of a fashion magazine. His professional commitment met with barely hidden scorn only going to tell of the world we live in: that looks do count. Appearances do define one’s social standing and people are shallow enough to succumb to it. What Howe does spectacularly, however, is that he starts off the story from the beast’s perspective. He is already doomed.

The film opens to Rupert/The Beast (Joe Da Costa) grooming himself. His unruly hair trimmed, horns polished, he looks respectable… for another world. As he dresses up for his date, looking to buy flowers for the hopeful evening ahead, he is met with curious glances and sheepish apologies as children incredulously stare at him. This shouldn’t come as a surprise. Fine looking people aren’t spared from trolls these days, let alone a horned creature on his hooves. Costa who plays him is good, right from the opening frame. As he waits eagerly for his date (Charlotte, played by Vanessa Hehir) to arrive, only for her instant disapproval to deflate his morale, we see his routine. His walk of despair back home, as Kiwi, the dog barks at him.

What’s interesting to note is, the Bella here is a quirky, little plumber; Pari (Rebecca Banatvala). Her appearance is out of necessity and not chance. With such slight, noticeable shifts in the introduction of his characters, Howe establishes one thing, that he is the master of this fairytale, doomed or not. Of course, he couldn’t possibly resist doing away with a ballroom dance sequence (pictured on Rupert’s second, unsuccessful date, Becky, played by Sarah Daykin) or the gigantic library that makes for Bella to find her confinement bearable from the original tale. But, Howe does it skilfully here. His editing skills on-point, the film is steady paced despite enough screen time devoted to Rupert’s lonesome existence.

Raphael Fimm’s music stays with you. It’s peppy where needed, melancholic where required and hopeful where there’s a shimmer of it. The ensemble cast does their best, including the unmissable Kiwi, whose repeated appearances and barks are finally met with the full-blown revelation of the beast. Each of them plays a role to not only carry the narrative forward but also to add a rich layer of subtext to the storyline. One wonders what makes it so hard to often look for what we seek closer home…

Whether its Banatvala or Daykin, or even the shortest appearance making Kyrelle Lammy and Joy Carter; they’re good and never feel like a wasted addition. A special shoutout to the prosthetic and SFX make-up artist for bringing the beast to life. In the end, cinematographer Tamás Apor Méder’s lens offers that final shred of hope, that one, lingering rose petal that holds all the timelessness of a classic tale told once again.