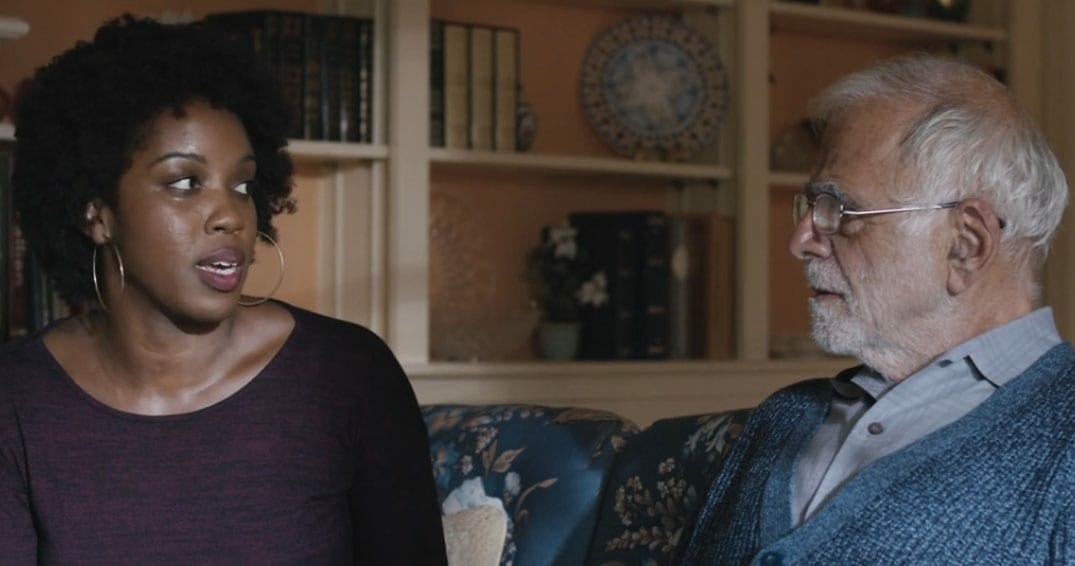 Historical racism against black people and anti-semitism are brought together on one plane in the form of holocaust survivor, Howard and young, black academic, Michonne. Gregory G. Allen’s 11-minute drama Reparations brings up raw topics, asks uncomfortable, conflicting questions, but above all, tries to retain its humanity and remind the world of its own.

Set in the home of Holocaust survivor Howard (Ed Delia), the film stays focused on only two characters, and there still was not enough time to unpack everything that Allen’s film could be and is. Opposite Howard is Michonne, interviewing Howard as research for her paper on reparations. The film takes place in the last of a series of interviews between them.

This is a moving film in many, many ways (Beth Perry and Chris Doney’s oft-mournful score is a sublime contributing factor to that), but it sparks questions for the ambiguous subtext of the questions its characters conflict on. The approach it takes instead is to let it hang, giving the audience the option either to forget about it or think about it, much like how real life works. Michonne barely controlled anger at the world is focused on: the camera closes in as she breaks her pencil while debating with Howard over why black people deserve reparations. There is no conclusive answer to the question, and the film does not come back to it again.

The film is intercut with Jazzmen Lee-Johnson’s animation to depict Howard’s past; it is arguably the film’s most potent elements. As the audience begins to learn more of Howard’s past, Reparations’s empathy comes to the fore. Michonne’s discovery of one of Howard’s doodles uncovers long-buried parts of his life; the rough etched pink triangle is a sombre reminder of its road from a badge of shame to one of pride. In this manner, Michonne can be viewed as the face of this world’s hard-earned evolution while Howard, who kept the doodle of a boy with the pink triangle buried and believes he was punished with a barren woman, is the reminder of the old days.

Delia makes his character a real person (Allen’s grounded screenplay certainly helps); Howard is a fully rounded character, he has his idiosyncrasies, ideas and distinctive mannerisms, something that transcends the character from merely a personification of a grisly story into a real, very real person who is coloured by his experiences, the good and the ugly.