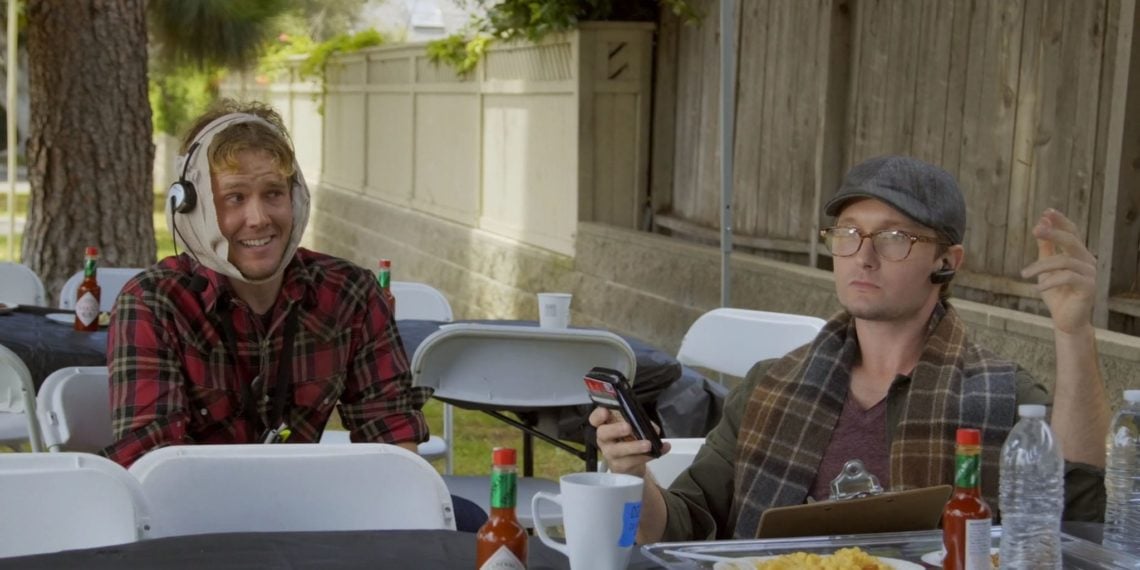 “Everyone sees the moments of glory, but no one sees behind the scenes” quotes Allyson Felix, but when a rube PA with unhealthy doses of enthusiasm, which might confuse him for a cocaine addict, an actress who is too attractive to let you pay attention to her talk, a director who would be the next Tarantino if only he had his talent or any talent per se and a producer who’s rich in wealth and creeps, set out to make a film, you bet the quote might turn on its heels! And, with the meticulous yet hysterical direction of Russell Robertson, it turns a good 360 degrees, at that!

Life On Set is a mockumentary that takes you on a comical ride with no shortage of chuckles. Russell Robertson’s direction makes you an active part of the film, but how he breaks the fourth wall makes for an interesting observation. Robertson does this by adopting vigorous camera moments. He makes the camera focus on the environment, zooms in to uncover fine details in the background unwrapping a silent joke planted only to invite more laughs.

Robertson and Jason Carr’s script does rely on stereotypical characters with over-exaggerated traits, but instead of reducing them to caricatures, they rather aim to explore them to unravel the humour, one stitch at a time! Characters drive the plot insanely; their traits well-balanced delicately on the scale of believability and fictional, compliment the chaos being unleashed in this absurd world. It’s quite a commentary on the toxic elements of show business with a dash of dark humour, but light-hearted enough for its casual viewers. Speaking of characters, the ensemble cast is to-the-point. Each of their character development is aligned with the story and is paced consistently, allowing them the space to grow.

Ben Campbell’s portrayal of Paul is relatable. He makes him this charming bloke who isn’t jarring on one’s nerves, despite his nervy character. If people fall in the ditches they dig for others, Paul doesn’t need anyone to do this deed for him. A perpetual case of foot in the mouth, he is disastrously charming and remains a pivotal character that keeps resonating throughout.

Always thought directors need dexterous skills in filmmaking? Wait until you meet Rod, played by the talented Todd Gaebe. Rod is volcanic, insolent and indecipherable and Gaebe manages to not only make him likeable but also outright hilarious. Of course, besides the comic timing, it’s the subtext of the storyline that supports this endeavour, but Gaebe quite efficiently manages to pull off a successful portrayal of a heavily flawed and misguided director. His narcissism is only forgivable thanks to the chaos he creates around himself. As if these two alone weren’t enough, we also have an entitled producer, Hoop (Jason Carr), whose heart refuses to take the cues from a potential date. Hoop remains the beating heart of the film. His scenes are so ludicrously wacky that they remain amusing to the last breath. His desperate attempts at luring his love interest might one day earn him a lawsuit, but for now, the slapstick comedy remains his saving grace.

Lauren Chapman is terrific in her role as Catalina and unlike Hoop, her character is layered. Catalina’s childlike demeanour, the halting speech and mannerisms all work in favour of creating a spectacle. To Chapman’s credit, she delicately balances her performance and the thin line between naivety and dumbness is well maintained. The supporting cast also does a great job in adding another layer of hilarity to the film, with special mention to production assistant played by Brenden Takash and the newscaster Mike Marlow.

John Holman’s cinematography doesn’t strike a chord at the start, but the more you indulge in it, his background details and shots become come to complement the acting and writing of the mockumentary. Most of the scenes are shot indoors and the background is blurred to focus on the characters but that’s more intentional and adds up to the theme. Life On Set is void of any background score save for at its start which does a good job at sucking you into the mood for a parody very well handled by Alan Arguelles.

Editing by Robertson, again, helps stitch all the individual stories of the various characters into a visual anthology. The pacing although could have been kept faster, along with script supervisor Mike Taylor’s efforts is a bearable flow of the narrative. Life On Set certainly has a lot to offer. From its ensemble casting that warrants a storyline for each of its characters, to a peppier background score, the film has enough potential to be made into a lengthy series, this being just it’s first. If nothing, it’s going to give you a lesson or two on how to make hotdogs with your fingers!