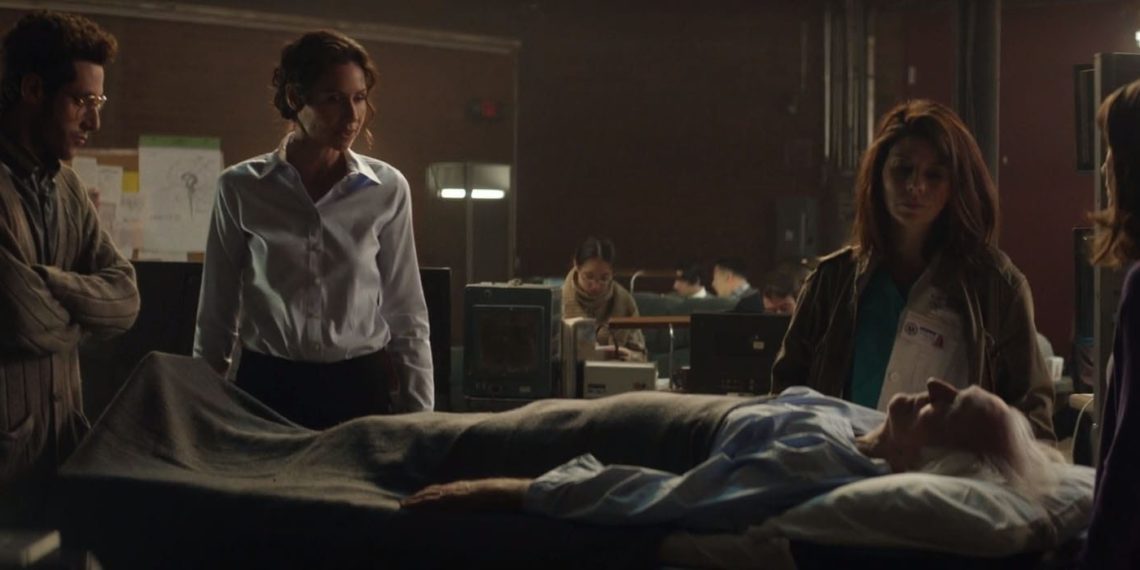 What is the exact moment of death? Is it a clinically-declared physical phenomenon or a spiritual experience? What happens when a person ‘dies’? Does the soul exist? Laboratory Conditions, directed by Jocelyn Stamat, tries to grapple with these larger-than-life questions in a classic Science versus Faith situation.

The film begins with a low tense, dramatic music, hushed up voices, and dim-lit setting, all conjuring up an atmosphere of mystery. Dr Emma Holloway (Marisa Tomei) is in search of her missing deceased patient. She notices an oddly-behaving ambulance and follows it, which leads her to a huge laboratory where an experiment is to be carried out on the stolen patient, still alive but barely, under highly regulated and monitored conditions. All this is under the supervision of a scientist, Marjorie Cane (Minnie Driver). She, along with Robbins (Paulo Costanzo) and a bunch of others, wishes to determine the exact moment when the soul leaves the body.

The engaging screenplay (Terry Rossio) makes clever use of dialogues, expressions and tone to portray the opposite sides of the human philosophy that the characters believe in. Driver, with her composed manner and set face, is perfect as Cane, who almost comes across as an evil force for the sake of science, unabashed in her admittance of theft, unable to believe in the existence of something that cannot be detected mechanically. Tomei, as a bewildered, anxious and sympathetic doctor, is just the suitable fit. Costanzo, with his oversized glasses and swift scientific jargon, aptly portrays a researcher lying in the middle of the two extremes who is able to feel a “presence”.

Cane convinces Holloway to give in and watch, if not participate. The film takes a dramatic turn when Dr. Holloway is able to see what the experimenters cannot. Stamat does not waste time on making the audience guess about visions and hallucinations. What she sees is real enough. Instead, the film points at the others as lacking vision or connection.

What makes the film plausible is that it does not attempt to be larger than its scope. What Dr. Holloway saw becomes her own cross to bear; Laboratory Conditions becomes a secret whispered to the viewer, its implications to be kept within the laboratory walls only.