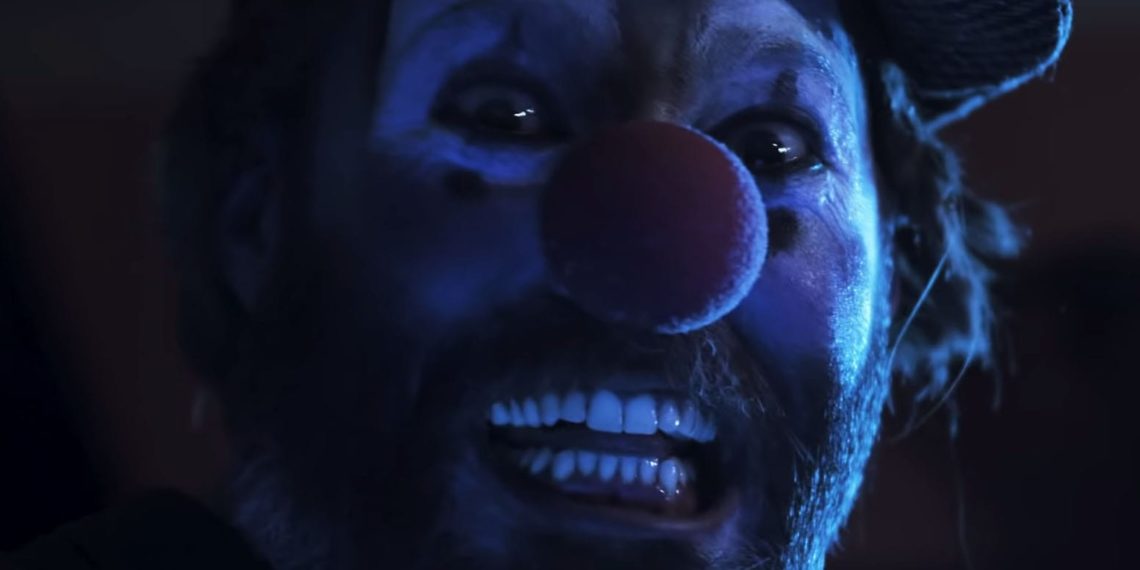 It’s Halloween. A mother and her little daughter have fallen asleep in front of the TV. On waking, when she tries to switch off the TV, it starts up on its own, over and over. In Lee and Sam Boxleitner’s Mr Ticklez, there is a new clown in town and he relies on the TV to scare people.

A rather specific predator, Mr. Ticklez (played by Lee Boxleitner) uses the silent film format and style to capture victims. His words are even shown in cards after each line. This style adds texture to the film and variation to its visual style. The film features a predominantly blue colour scheme to signal night-time. The monochromatic and washed out frames are sometimes effective but often flat.

Mr. Ticklez’s claustrophobic clowning falls just short of the mark for a sizeable portion of the film to elicit a strong enough sense of dread, but is effective at crucial turning points in the story, giving the audience the terrifying thrill they came for. The handheld camera, although it feels cliched, manages to add to the feeling of someone creeping in on the sleeping characters.

The film is largely devoid of spoken lines; both Boxleitner and Heidi Hinzman, who plays the mother, have to rely on their body language and face to create an engaging story, and both are good at their jobs, perhaps a shade better than the overall quality of the film.

Mr. Ticklez’s score combines horror staples with silent era music, creating a sincerely terrifying soundworld, possibly the best aspect of the film. The conclusion surpasses the fatigue of a predictable outcome chiefly because of its score. Clowns have long been established to be the stuff of nightmares, Mr. Ticklez capitalises more on the claustrophobia of merry silence.