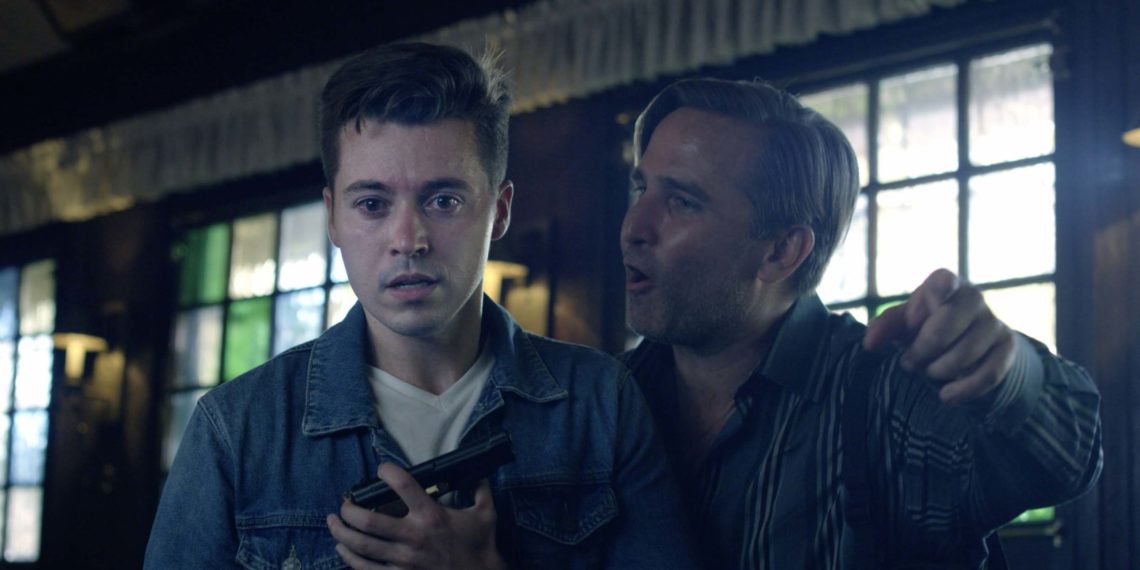 Richard Harrington’s A Family Business tells a tale of more than just a father and son reconciliation, cocooned in a plot of sour relationships and cold revenge. Set-up in a cozy little coffee shop, three different storylines run parallelly, only to come together later in a shrewdly laid plan.

A son (Sean Ormond) meets the father (Mike Hatton) who he has never known. A couple (Cree Kelly and Arthur Victoryan) meets with their wedding planner (Jo Dellapina). And a man (Brian Carney) is being tortured to be ultimately murdered. Promiscuity, threats, and murders tie in (almost) neatly with the multiple plotlines. Editor Yannis Zafeiriou and DP Joe Staehly keep the narrative progressing smoothly; the lateral tracking shot in the introductory scene is a standout.

What sticks out like a sore thumb is Debra, the wedding planner’s threat to the groom to be, Peter. Her lines are terribly corny and Dellapina’s performance is visibly self-conscious, to the detriment of the already floundering scene. The link between all three storylines and the protagonist of the film, Brendan (who asserts his claim as Richard’s son) is the most believably delivered character in an array of otherwise poor performances. Hatton is a little too loud both verbally and otherwise.

Watching one of the goons squirm and grimace during the man’s torture connects the world outside the back room of the diner to its ongoings inside, which even for characters within the story can feel bizarrely unreal due to its very gruesomeness.

The background score is a strange presence, never not there but it is never clear what Celtic music is doing in a film that has no clear connections to the culture or tradition or even why it is almost always present.

Harrington maintains a composed approach throughout A Family Business. A composite plot hardly obscure yet tricky thanks to an even shuffling of characters. A poised blend of a story through simple camera movements that neither exaggerates nor tastes bland. Set in a 12-minute runtime, A Family Business stands for an aide-memoire of revenge is a dish best served cold!

On Air: Masterful Telling Of A Man's Buried Past