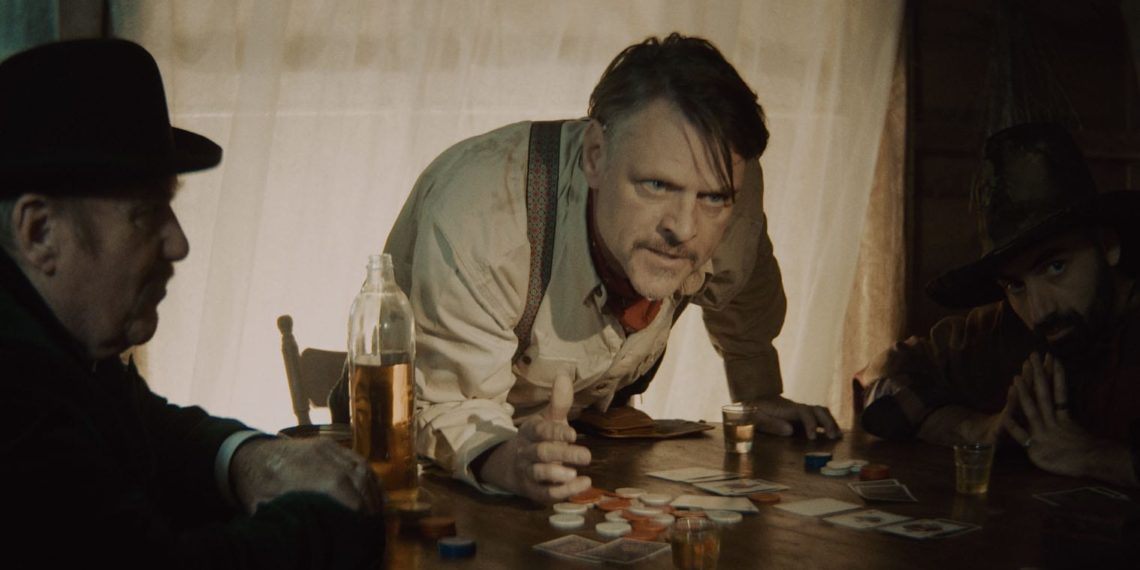 Filmed in Australia, Dusters is a 28:30 minutes long film that pays homage to Western films. Director Noel Vinson’s take on it seamlessly blends the classic genre with contemporary cinematic styles of horror and suspense to give a slow, neatly paced film that surprises the audience as much as its characters.

The film opens to Rene Michelle Aranda, who plays the retriever dragging Theodore Thibodeaux (T.C. De Witt) along. He has a bounty on his head and frankly not much to lose. Vinson doesn’t waste time introducing his characters. We see Loans (Luke Bovino), Marshal (Mal Kennard) and Welles (Roger Ward) sitting, waiting, preying. The casting director ought to be given a salute for the stellar casting. Not one of them outdoes the other. If anything, they complement one another with their performances. As Matthew Hamm’s music plays in the background we get transported back in time, to another world, another life.

The table is laid and the cards are pulled out. It’s poker time and the boys are ready with their cowboy hats. In their thick accent, the three men egg Thibodeaux to join the game and he does. It is one thing to have an ensemble, another to give them equal screen time. Vinson manages both, effortlessly. As the game proceeds, the stakes raised goes higher until its no longer a simple game of cards, but a challenge, a duel really, of cards and wagers – and no one stands to win unless all is lost.

Most of the filming during the game remains indoors, understandably. The light and space are both effectively used to carry the narrative forward and to give the actors sufficient space to showcase their acting prowess. As Jon Kline’s camera pans through the cramped space, we get closeup shots of the characters. Each actor bringing out the character with conviction – each twitch, each smirk, each wink standing out to give a subtext to the narrative, the acting and direction is faultless. The film is evenly paced and the credit to that goes to the editing by Rodney Mansour. The scenes seamlessly switch between the characters and the flowing conversation between them is so effectively filmed, that one feels like the fly on the wall – very well aware of the location and the sequence of events.

There’s no way one can pick one actor over the other. For not only is the casting perfect, but also each character very well-written. While clearly giving hints to whose side they are on, there’s no way of predicting the storyline or the climax of the film. And, it’s to Vinson’s credit that the suspense is well wrapped up until the very last few scenes of the film.

Co-written by Noel Vinson and T.C. De Witt, Dusters is an ode to stories and cowboy tales, to the scenic locations of Australia and Western classics, to the incredible vision of filmmakers like Vinson and the power of ensemble cast that does full justice to the story written. Remove your whiskey glass and enjoy this film as it transports you to a time of daring men and their horrors.