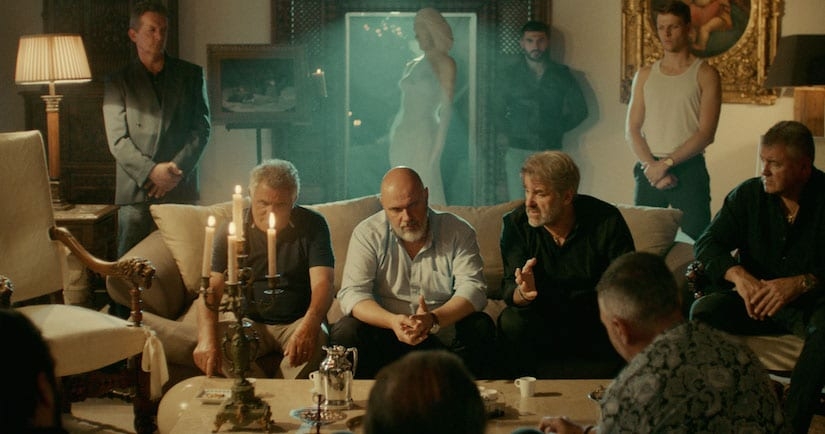 Hugo Diego Garcia’s French-Italian short Cagnolino (meaning little dog) is as epic as Tony was, his first venture as screenwriter. Garcia retains themes, actors and style from Tony. There is again that delicious mix of music, bliss and fast-approaching trouble.

At the centre of this tale is Dario, played by Garcia, and Dali (Pietro Mercieca). Two men from distinctly different groups, but rooted in the same violent world. Both want to escape these worlds, to move to a safer, more peaceful way of life.

Dario and Dali, on two sides of the same destructive coin, struggle with the same push and pull, as they try and fail to get out of the world they grew up in. And both, therefore, have the same reluctance and tired actions. These are the reluctant villains and they have had brushes with destruction far too many times.

What keeps them close to the edge are their friends and family. We meet Dali’s first. Three barely old enough men. It is telling that the boss in this group (Idir Azougli as Rabah) looks easily the youngest, most boyish. He is the most volatile of the lot.

The things they have idolized hangs over their head, a very aptly placed Scarface poster standing in for it all. Certainly it is not the artistic merit of Scarface or The Godfather or Cidade de Deus that attracts Garcia’s characters. They learned lessons that these films weren’t teaching. Their lives are dominated, marred and sometimes even bettered by violence. The sleek glamour that Hollywood wraps violence in is a clear influence on these characters and their peers.

Garcia knows colour. The city shot like it has lava running through it is a standout. The slow moving shots from Tony are used here too, except now the focus is split between a group like Tony’s and an older, far more powerful, mafia family.

Class and race issues are a theme of Cagnolino, because besides power, the title also makes reference to class differences and divides. If Dali’s lot are the louder, hungrier for violent glory, they are also the smaller players in comparison to Dario’s. Garcia’s direction, his and Lorenzo Bentivoglio’s performances (Bentivoglio plays Giacobbe, Dario’s cousin) emphasise this difference by imbuing their characters with a restrained, self-assured air. Giacobbe and Dario are less willing to resort to violence, far more level-headed: they are the bigger, older dogs, who know the price of recklessness.

Music has remained the same for Cagnolino as it was for Tony. Not that it is a drawback; the two stories feel pulled out of the same universe, an informal sequel of sorts, especially when you watch the old faces from Tony.

Cagnolino is mercilessly, unflinchingly violent and at times, it can feel too much, almost unnecessary, but perhaps the point it demonstrates with such brutal force calls for it: the big dogs, when they bite, do so with intent. In the end however, the film retains its reluctant heroes’ instincts. And even if it is just that bit predictable, the thrill and satisfaction of the climax hits at just the right times; its memory stays long after.