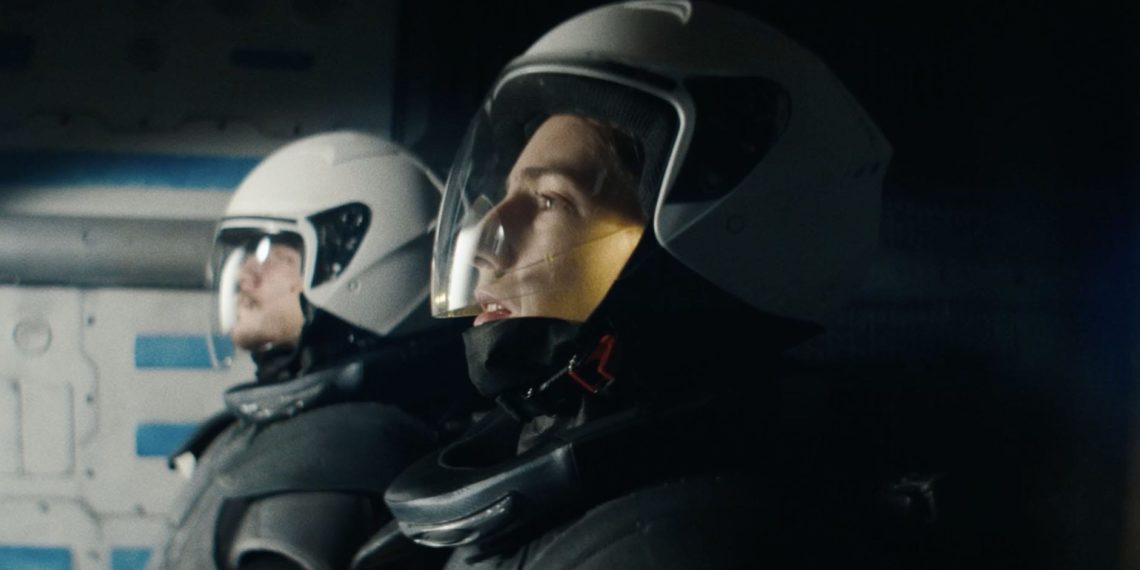 We Choose To Go shares its premise with Passengers and faintly echoes the emotional depth of Interstellar. With only 14 minutes to tell its story, the focus is kept on the terrifying question of acceptance rather than a more bravado-filled tale of triumphing insurmountable odds.

Writer-Director Marlene Emilia Rios centres the narrative on newly awoken pilot Angie Miranda’s (played by Sarah Flower) hours onboard the spaceship Horizon, 63 years away from the planned path. Her co-pilots are dead, the people she left back home can hardly bear thinking about, and food is– to put it simply– unavailable. And after 60 years of drifting, fuel to return is a joke.

For company, she has Nova, the AI assistant, voiced by Rios. As the only speaking character in the present, the AI is bound by narrative needs to be funny. And so she is but in the deadpan, funeral humour sort of way. The only other living character we meet is Pilot Miranda’s husband, Gabriel (Carl Briedis), who we see only as part of her memories of the life she left behind. Like the communication message from Earth, his memories play on a loop for her; both frozen in time for her. Tellingly, Miranda’s outfit looks nearly the same as in her memories with her husband.

As with every film that has space travel at its core, the subject of choice is its underlying theme and burning question. The family of the character asks why they would choose to go, the audience might wonder how the choice might play out for the character, while the character themselves contends with these and more. Rios brings this to the fore. By cancelling every possibility of a turnaround, Rios leaves scope for only contemplation of choices. Miranda wonders about the choice she made, what she left behind for it and it will bring her now, as she grapples with the realities of her situation.

And as all characters in her place, she chose boldly back then, and accepts her reality with a determined bravery now. With gravity, grief and perhaps even fear. But then again, what is bravery in the absence of fear? Choice, as Rios argues with her film, is the ultimate arena of strength, bravery and acceptance.