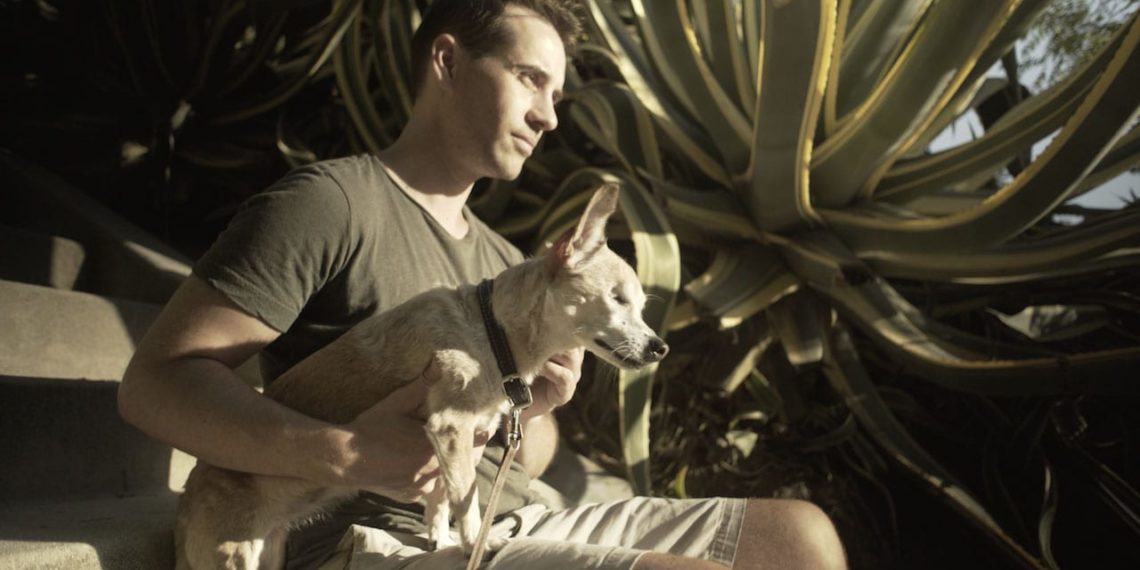 Writer-Director Colin Thomas Jennings’s Li’l Chit Chat is a 9:23 minutes long romantic comedy – but hold your reigns, it isn’t the romance you presume it to be. It’s even better. It involves a furry little companion with a wagging tail. That dogs make best friends because they wag their tails and not tongues is a well-known quote. But Jennings manages to reverse this and yet set the record straight, that regardless of the wagging, there’s no beating these four-legged, fur ball of love and absolute devotion.

The film opens to a morning in Fletch’s life. He is a regular guy. And, as James Roddy’s camera takes its closeup shots, we see Fletch through the eyes of his partner in life – Little Dude, an adorable little, one-eyed dog. He goes about his day, his routine complete with filter coffee and a walk with his favourite companion. As Fletch (played by Jennings) plays out his day, we see the bond between the two, the genuine love and camaraderie. We know then, that this is no acting. This is real. And, Jennings compounds it with very natural, effortless writing. The dialogues, all monologues but essentially a conversation between Fletch and his pet make for an interesting tell-tale.

Through the talk, we know of Fletch’s own thoughts, on his dating life, health, socialising interests; it’s a peek-a-boo into this regular bloke’s life, and we see the vulnerability, the endearing awkwardness and somewhat cynical resignation. Jennings brings out a relatable honesty in his characters. Whether it’s the hiking couple or the waitress, or the woman on the street – all of whom stop to have a conversation with him, all thanks to Little Dude, make up for an interesting ensemble.

Li’L Chit Chat is anything but little. It’s an ode to pets, to that universal love shared by all who own them, love them, belong to them. Unknowingly they forge a bond beyond their owners. And, as Roddy’s camera showcases their world – it does a splendid job at picking into Little Dude’s world. The low-angle lensing particularly does well, as we get down to his level and see Fletch through his eyes. Mike Baker, whose music remains largely peppy stands out the most during the goofy dance Fletch breaks into with Little Dude in the privacy of his home. ‘We’re Best Friends’ by Baker is bound to remain on your lips as the credits roll – that’s guaranteed.

Little Dude and Fin The Great remain the stars of the film, offering a lovely setting for the meet-cute between their masters, and although the film remains light, it is yet surprisingly touching with its tender portrayal of a very regular guy and his extraordinary friend – a furry little dude.