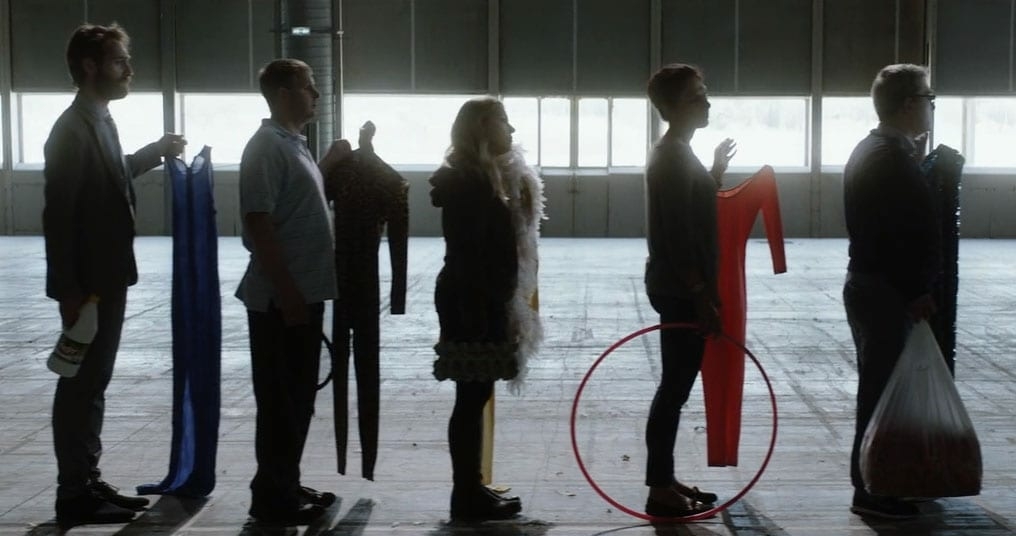 A dystopian world is the perfect stage for a storyteller with which to build characters and stories that causes unease and forces audiences to confront possibilities that feel entirely real, or worse, distills elements of the familiar world to show with acute intensity just what is going wrong in the present day. With Filippos Tsapekis’ 9 to 5, the writer-director uses dark humour to cushion an uncomfortable possibility: what if, good intentions can, over time and with bad decisions, twist themselves into something of a monster that eats away at the very thing those intentions were meant to benefit?

The premise here is sinister: you pay large fines and/or undergo sex reassignment surgery and/or demotion to a lower job if you are caught being tired or lying about it. In this world, your health is paid great attention, because as implied, tired people are potential criminals.

Right upfront: the protagonist (Yannis Papadopoulos), a lawyer, is demoted from a lawyer to a lavatory curator AND made to change his gender. Now the moral on the face of it is simple: totalitarianism is not a good way to change the world, no matter how noble the changer’s intentions. But really, the entirety of the film exists to build up to that striking climactic shot. It is bleak, despairing and unforgettable, hitting you out of nowhere and staying with you for days afterwards.

The building action consists of Mr Papadakis’ test after he’s stopped during his drive home from work. His examiner, played by Kora Karvouni, is formidable and clipped, each quality feeding the other. DP Pantelis Mantzanas is excellent; his framing of Karvouni’s character never lets you forget the power she has in deciding where any character in that world is destined for after they have had the misfortune of facing her, while simultaneously reminding the audience that she is, after all, only a servant of the government. A salaried personnel who also ultimately has her fate in someone else’s hands. Someone who also has to work shifts like Papadakis and the countless others fighting, hiding, and being defeated by tiredness.