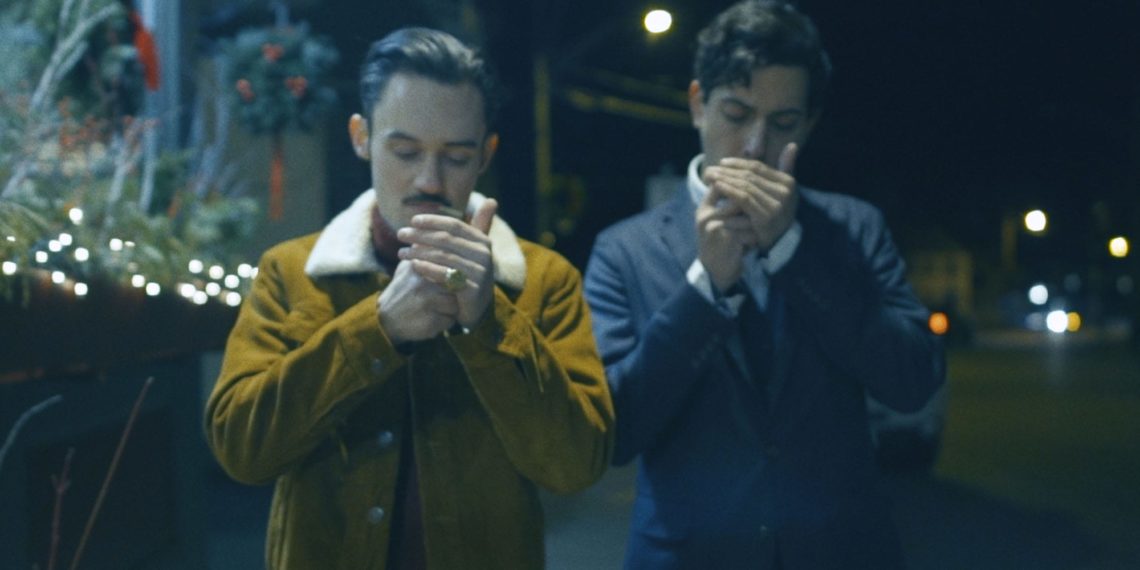 Chris K. Daniels knows what he wants. With action-comedy Scumbags, he takes his stylistic sensibilities and gives them full rein. Besides directing, Daniels also served as cinematographer and editor for the film, and Scumbags visibly benefits from the artistic control he retains. The plot visits the old trope of two conmen who are friends but also rivals, in a wise move also adding a bit of retro vibe to the whole thing.

The two thieves slash friends slash rivals are Marco (played by Scumbag writer Samuel Caswell) and Vincent (Chad Comiter), dressed like smooth-talking gentlemen and dudes from a bygone era. Set in modern times, their sartorial disparity sets the tone of the film without taking away from its integrity.

The two meet again after years while Marco does the old sleight of hand to steal a woman’s wallet at a bar; Vincent does the old sleight of hand to steal it from Marco. This is not new territory, but editing and music spice it up to serve the flashy comedic tone of the film. Soon, they’re catching up on their latest heists and con jobs. Two ladies are involved in their stories: A Leilani (Alexandra Cruz), whom Vincent abandoned during a job, and a Jessica (Luna Orion), whom Marco charms with terrible lines.

Reminiscing about the olden times brings up piss drinking bets, shooting fiascos and a general psychopathic sense of humour to be found in both. Caswell is natural as Marco. His past version is the right amount of cocky and insecure, wanting to constantly one-up Vincent. In the present, in the absence of rivals, he has flourished into cocky and confident. Still despicable, but with an air of self-assuredness. Comiter brings a suavity to Vincent; the egomaniacal dapper gentleman with a competing, even superior self-assured air– the undefeated better, the manifestation of everything Marco wants to be.

The screenplay throws a twist at you at every turn. Again, it is not new but comedy dresses up the old and the result is undeniably entertaining. Daniels’ style is a visible and distinctive feature of the film, whether it is the close-ups or the air of danger and congregation of psychopaths.

The maze of sharp twists as each character pulls the rug from under the other is fun, fast-paced and evidence of a sharp sense of humour. Daniels has written layered, well-matched characters who play off a reliable plot foundation. Whether Marco does manage to win one over Vincent keeps the tension of the film going. It is ultimately a game of two egos.