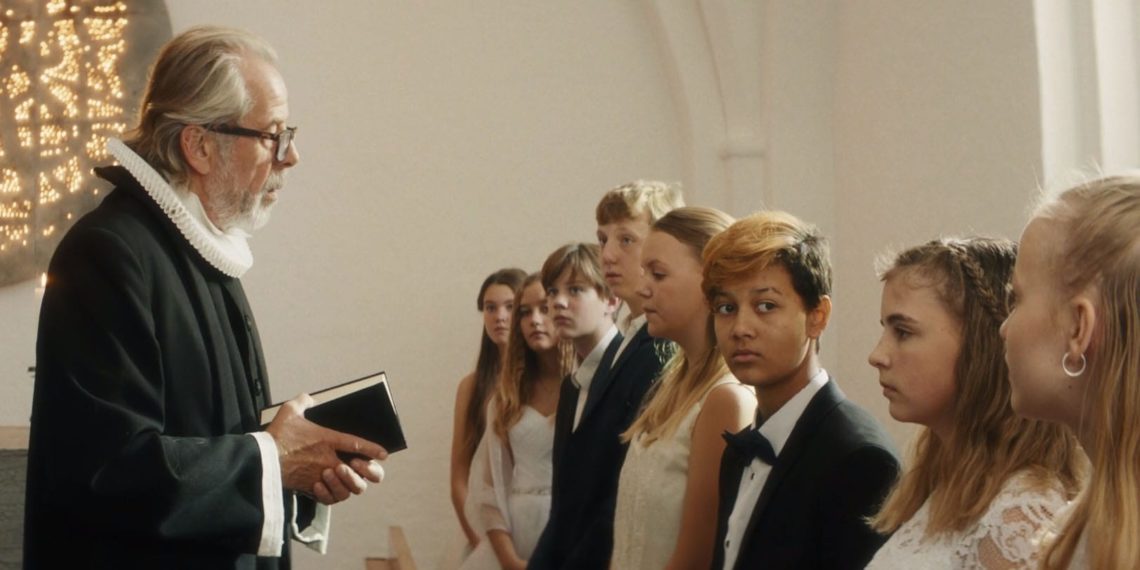 Writer-Director Marie-Louise Damgaard’s The Confirmation is about a teenager’s transformation, but not just into adulthood, as one might imagine. Entirely shot through the prism of the mother’s lens, the story revolves around Mathias (Xean Peake), a transgender boy, both in real and reel life and his poignant journey into embracing his identity.

The opening shot itself drops a hint. We see the mother carefully applying lipstick. As the camera pans closer, we realize this story is as much hers as it is of anyone else’s. Although faintly familiar, the shot of a reflective woman applying a distinctive shade of red to her lips, Damgaard knows her turf. By establishing right at the start who the narrator of this story is going to be, Damgaard makes it clear who we are here to listen. Ellen Hillingsø who plays the mother, Susanne, is polarising. Arresting and effective, her every twitch in the eye speaks volumes. Even with scenes that warrant no dialogues, Hillingsø manages to epitomise the catch 22 she is in. Wanting to support her child, she turns into an overprotective bear, willing to tear apart anyone bothering her little one.

Irv Johnson’s music plays sombrely in the background when we first see Mathias. Innocent, impressionable and raw – that’s him. Regardless of the gender identity and the issues the film tries to highlight, Damgaard and Peake strive to ensure that we don’t forget that Mathias is after all, just a teenager, like any other. Wanting to blend in, fit in, his sole desire to be a normal teenager is achingly universal. The scenes between his mother and him, whether it is in the private or public are telling of the friction between them. Damgaard manages to brilliantly seep in the universality of adolescence and frictional parental relations.

Using the Danish tradition of the Confirmation in the Church as the symbolic crossing of the line that marks the end of childhood, Damgaard once again ingeniously rings in familiarity – familiarity of the tradition and the binding restrictions that exist in the society. To commemorate her son’s Confirmation as a Christian, but also as his desired gender, when the family gathers under the gazebo, a few drinks later all inhibitions are let loose, be it by the guests or Susanne.

What is fascinating is that Damgaard plays with her characters. While focusing on Mathias’s gender identity and the society’s cumbersome approach to it, she lets Susanne remain the focus. It’s the juxtaposition of it all that makes The Confirmation spellbinding. The focus of the story lies on the child, but is narrated through the lens of his mother. The event selected for it is a fitting traditional one but the conversations revolving it are anything but traditional. The symbolic marking of a child turning into an adult, but a commemoration where the adults forget to play their role themselves – that’s Damgaard’s The Confirmation – moving, truthful, effecting.

As Robin Holtz’s camera sways between the characters at times lingering a tad bit longer, nudging the audience to invest in their emotions, the full glory of the film comes into play. Edited by Laura Skiöld Østerud, the film stays true to its course, not a minute longer, not a scene lesser. It’s impossible to not be affected by Mathias and Susanne, not that the remaining characters aren’t notice worthy. But the mother-child duo manages to outweigh the collective performance of the rest of the cast.

This Christmas, think of Mathias and his likes. Remember they too have the choice like everyone else, to be just whoever they choose to be. Marie-Louise Damgaard’s The Confirmation is neither philosophical nor rhetorical, it’s just a glance at an explosive moment of one family’s dilemma.