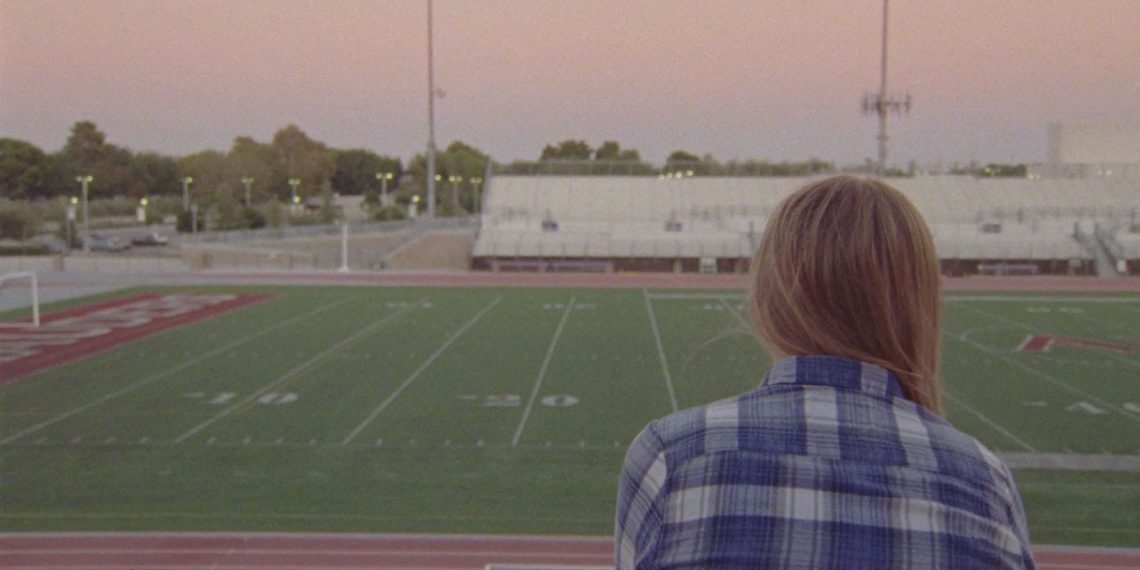 Written, directed and edited by Caleb Knueven, Stadium is a 8:41-minute short film capturing the inevitable truth that so many of us must contend with through the story of a couple who are graduating and on the cusp of moving towards their own separate futures.

Knueven almost flawlessly executes the film – smartly conveying his ideas by juxtaposing two different stories to have one stand in as a visual metaphor for the other. The film begins with Sarah, sitting in the stadium stands, played by Jennifer Kranz, and Paul (Carter Krach) arriving in his car to meet her.

The camera shifts between beautiful shots of the red evening sun, dimly illuminating the stadium. As Jennifer continues to contemplate in the stand, a man (Dan Klass) warms up in the tracks alone until he is joined by a woman (Aubree Bowen) for their seemingly usual evening jog. They start jogging as soon as Paul enters the stands, an intelligent and symbolical editing decision by Knueven. The well-written script subtly narrates the world of our protagonists and remains engaging and interesting due to the smooth pacing of the dialogues. The understanding and compatibility between Paul and Sarah as a couple is admirably represented by the actors.

The story is an accurate illustration of a relationship and a natural depiction of its good and bad worlds. As Paul and Sarah discuss their present and the future when they graduate, Bowen and Klass keep jogging, the latter lagging yet not giving up, depicting the differences in two individuals in a relationship. Eventually, the viewer reaches a conclusion about the concerns of the protagonists as they move away from each other despite working well together, in pursuit of their respective careers. The whole session of Klass and Bowen’s jogging is an evidently symbolical addition depicting the journey that Paul and Sarah have completed together.

Knueven engages his audience with perfectly timed shots with smooth cuts along with befitting sound design. Taken originally from Vanessa Wheeler, the music sets the tone and creates a melancholy, even bittersweet mood throughout the film. Knueven makes numerous decisions which portray his thoughts in his audience’s minds clearly. The film is a smoothly executed idea that captures the harsh reality of life, depicts the pain of parting with those we love and care, teaches to move on and ends with a hope of finding a reason to keep on running.