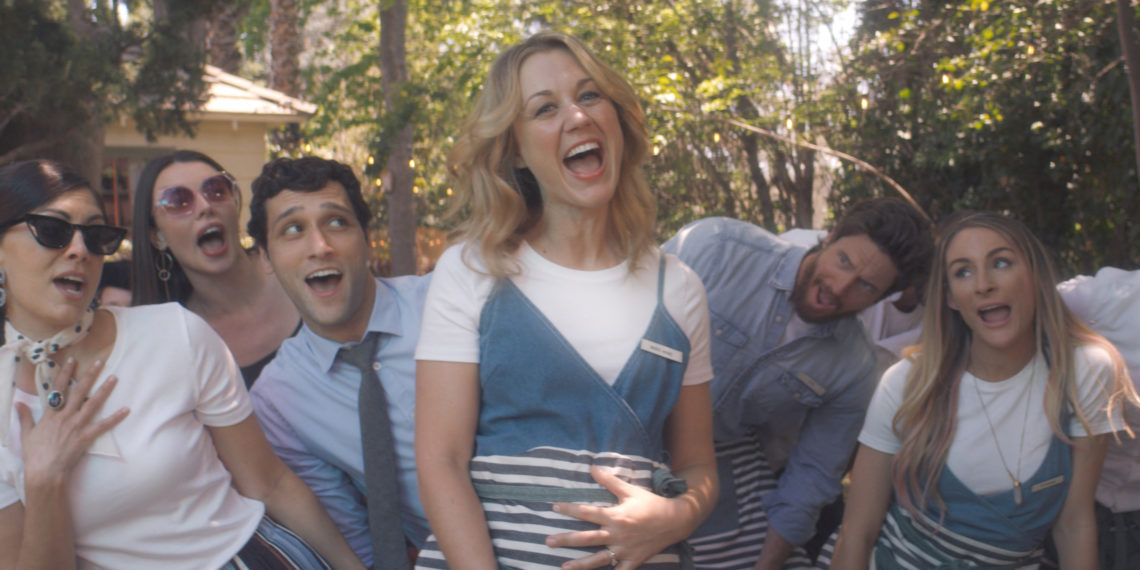 My baby is a bike helmet is a surprising revelation on a topic seldom explored in films – that of pseudopregnancy, but done here, with a twist. The story of a shy, why, even a timid waitress as she attempts to escape her thorny reality by weaving a web of lies is tragic enough, but when presented with such a fashionably comical style, it becomes a delight to watch. The product of dual-direction brought on board by Roxanna Dunlop and Arden Grier, My baby is a bike helmet sets the sails high as their joint vision pristinely delivers the film in a smooth narrative that almost never falters in its execution, style or genre.

Writer Julia Lehman sketches a believable narrative surrounding a coy woman (Mary-Anne, played by Lehman herself), who unwittingly gets herself remain trapped in a series of false pretences in order to not face the reality. What’s remarkable is that the viewer can sympathize with Mary-Anne, despite her utterly flawed actions. After all, she’s just another woman fawning over her honeyed dream of bearing her own bundle of joy. Ryan Sypek does a convincing portrayal of Josh, the loving spouse of Mary Anne, who remains understanding and supportive of his wife as the couple struggles to start their family. He is simple, yet deep. (Spoiler – The highlight of his performance is reserved for the climax where his blank expression that quickly turns into distrust amongst others is phenomenal). The supporting cast, namely Roxanne (Kelly Walker) and Cash (Barrett James) are brilliant, not only as characters that aid in the development of the story but by themselves too as an interesting character study.

Halfway through the 18:26 minute runtime, the viewer is serenaded with a well-placed musical ‘Mary Anne’  written and performed by Heather Porcaro and Alec Dixon, that not only carries the story forward but also serves as a good platform for Mary-Anne’s inner dilemma. This piece marks the development of a complex character arch for Mary-Anne, as she starts to feel the weight of her crushing reality. Her acting clearly portrays the complicated nature of the situation she has gotten herself into.

Editing by duo Anjoum Agrama and Arden Grier is neat, as no scene overstays its welcome, whilst not hampering the gravity of the emotional impact, which is a fine line to walk in itself. The cinematography by Joel Marsh at times, rightfully isolates the character, depicting Mary Anne’s conflicted state of mind, be it her fighting her long-lost battle or screaming out her frustration. His vision lingers on reverse shots, displaying the back and forth game of conversations. The film hinges on creative visuals by Kate Sypek to break down information to the viewer, discarding the reliance of a boring narration.

The contribution of the duo in the sound department; Thomas Cassetta (sound effects editor) and  Avery Kentis (sound mixer) presents us with a background score that perfectly aligns with the tonal consistency of the film, making us feel warm in the romantic scenes and sympathetic towards the character(s) where necessary.

The entire cast and crew have done justice in bringing forth Mary-Anne’s world; the slightly dysfunctional, the nearly delusional, but achingly believable world of laughter and lies. The film deceptively presented as a comedy actually offers a very large slice of drama and tragedy in its portrayal of this expectant mother. My baby is a bike helmet will embark you on an enthralling journey; one which we all know from the title itself, isn’t going to end with the characters driving off into the sunset with an adorable newborn, but that is not to say that it doesn’t offer a welcome respite instead.