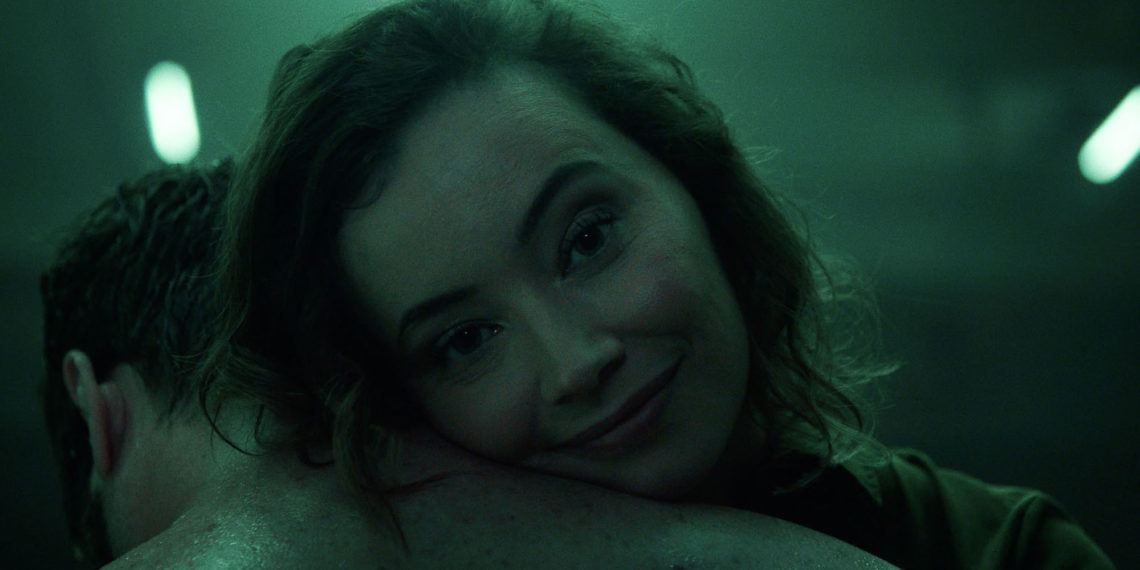 We hear his indignant protests first before we see him. Patrick Tamisiea, the hostage, is being dragged into a warehouse by two Russian thugs. As the thick green filter fills our screen we get the visuals and the hint – this is not going to be easy on the eyes. Director Sigurd Culhane Green Cobra is about a woman and her ahem, professionalism in a not so women-dominated field. Colleen Foy remains the highlight of the film throughout. She is the woman in question on whom a documentary is being filmed as she takes us and the documentary filmmaking crew into her world.

Foy who plays Green Cobra, the assassin, is a delight to watch. Just like Tamisiea’s entry, Foy’s too is punctuated with her voice, first. As she cheerfully carries on a conversation with her friend, the hostage, bound and gagged is dreadfully bidding his time in the background. The film although a gory display of varying levels of masochistic torture scenes is heavily pinned with deadpan humour, back and forth narrative and goofy scenes. Culhane is wise enough to know that an outré concept as this one can only be taken seriously if presented with an in-your-face humour and that’s what Green Cobra does and it does it well.

As Leland Cox’s music plays along, we see the full range of Green Cobra’s beastly spectrum. In comes the ex-boyfriends and heartaches, the sadistic pleasure of watching her victims wince in pain as she extols the virtues of her profession to the interviewer (Colin Willkie). The only glitch (perhaps!) in the film lies in its editing by Paul Alderman which although neat, considering the filming of the short using wide-lens in entirety and cut-to the interviewing scenes couldn’t have been any easy, however, could have done better to trim the back and forth narrative to a shorter runtime for better effect. Andrew Aiello’s cinematography captures the dimly lit warehouse and lingers on the cross lines of horror and delight.

The entire cast is convincing. Although Tamisiea remains gagged for most of his screen time, he is convincing. It’s to his credit that his character doesn’t get reduced to a caricature. And, Foy, well, she is a marvel. Right from the opening scene until the last shot where she leaves the two thugs with a fitting question, Foy owns each scene she appears in. The story is outlandish, no doubt, but to Culhane’s credit, Green Cobra is funny, goofy to the point of being awkward and yet engaging. When the groom messes with his boss’s fiancé, he doesn’t really know what he has gotten himself into – until he is handed over to a thorough professional, aka, the Green Cobra!