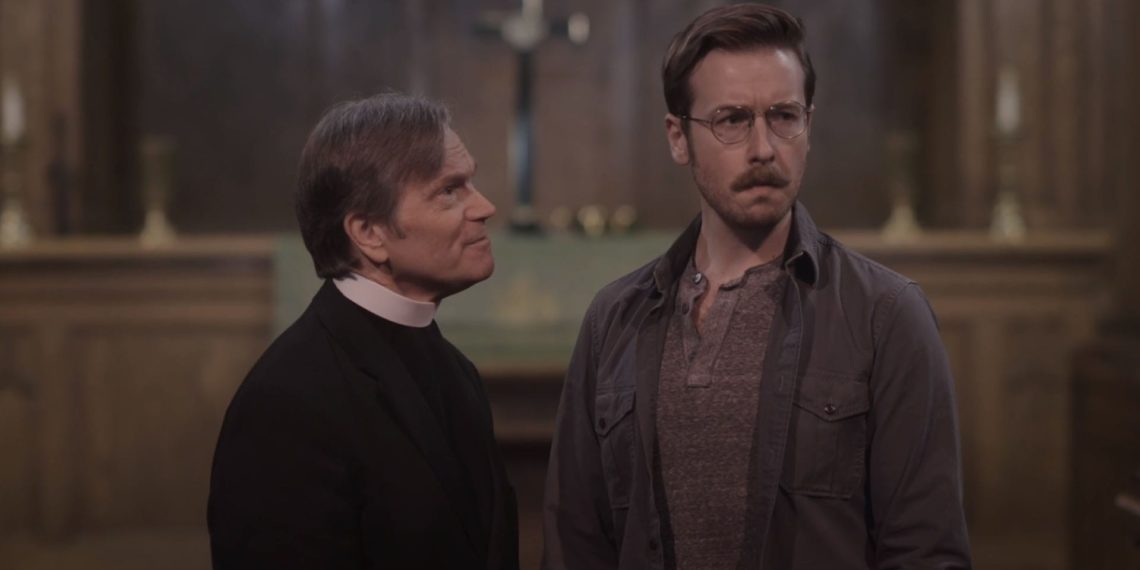 Ron Kanecke & Matt Johanning’s Last Rites comes with an intriguing plot: a priest — a disgraced one at that — on a quest to find a definitive answer on the existence of an afterlife. The priest, Jon, played by Joe Bearer is certain of where he’s headed in his quest, so much so that when offered the chance of absolution, he firmly rejects it on the grounds that what he has done, he will do again.

What he has done is secretly tape his meetings with people on their deathbed as he performs their last rites. His unflinching certainty leaves him to decipher a possible meaning from their last words, while the townspeople and relatives of those he had taped shun and shame him. We are told that it had made big news in the small town and there’s nary a one who doesn’t know all the details. Bearer has to — forgive the pun–bear the weight of the plot on his shoulders, and he responds by being too grave, so much that it is almost hard to take him seriously. The voiceover, although it makes a robust effort at maintaining the film’s tone of a mystical journey, it does not match well with the visuals, which has loud traces of shoddy production.

As Jon progresses with his endeavour, a clue takes shape, leading Jon to the site of a past tragedy, prompting one to wonder if perhaps he had made all his choices from becoming a priest to trying to find the afterlife because of the single event: his brother’s drowning. The journey up to this point was not ultimately particularly compelling, despite the premise. At some point, one has to entertain the possibility that the film may not go anywhere near to a daring answer (what it does provide might make for the most thrilling experience). If that might not smack of impending disappointment, the film’s craft certainly does. Johanning also serves as the cinematographer, and his execution feels amateurish on at least one occasion. The mysticism that the filmmakers were going for does not translate well and the viewing experience suffers as a result.

Last Rites comes with a tantalising idea and one might find themselves drawn to it on that account. If not provide gratification, the film certainly sparks the imagination.