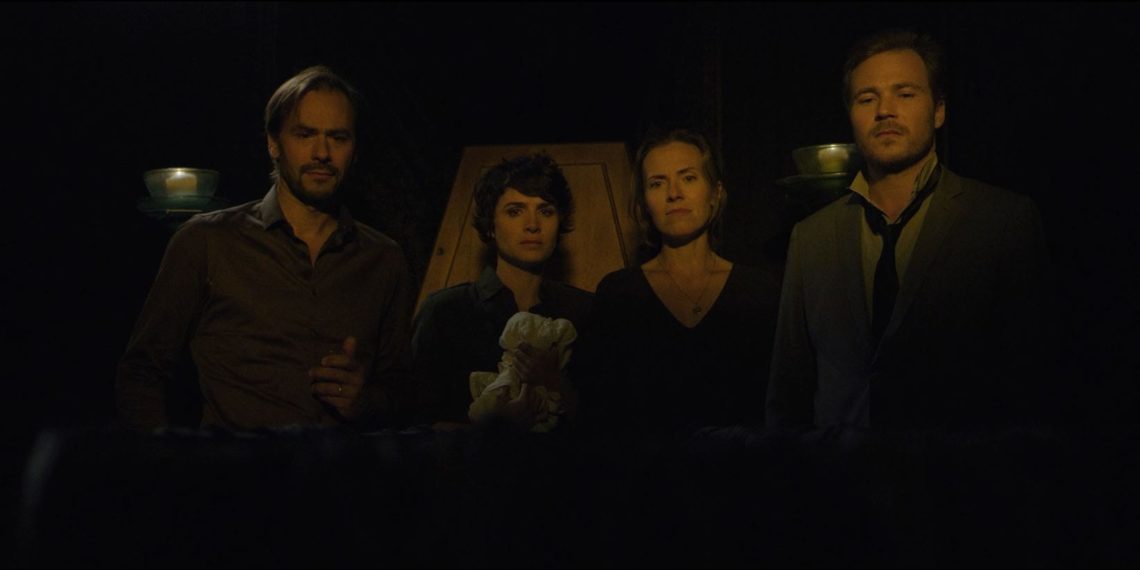 Very cleverly crafted, Marie Vandelannoote’s Funeral’s merit lies as much in its camerawork as in its screenplay. The plot is surreptitiously simple: Four siblings attend their brother’s wake after his suicide, old wounds are teased up, leaving everyone to grasp at the weakest straws to console themselves and assuage their guilt for failing their brother.

We see Jean, Julie, Justine and Antoine seated in a semi-dark room, their brother’s coffin behind them. The film opens with a rather dishevelled Antoine (Stefen Eynius), stretched backwards over his chair. Thereon, the handheld camera reveals Jean (Damien Boisseau) and Julie (Anne-Hélène Orvelin), and the recently arrived Justine (Anne-Laure Gruet).

The entire film is shot handheld in long takes, excellently using staging and blocking to depict the relational dynamics between the siblings, while beautifully building the plot along the way. Jean sparks the series of attacks that each of the siblings directs at each other, with perhaps Antoine being the most reserved. Each character is intricately bound by importance to the plot, each revealing equally about themselves, about others around them, and about the plot.

The eldest, Julie, breaks down with grief while both Jean and Justine find alternative people and reasons to transfer blame to. The actors deliver shining performances, especially Gruet who, at the peak of her tirade, maintains tone and pitch with impressive, brutal steadiness. Boisseau portrays the gruff, embittered brother. He does not still toe the many lines that their dead, authoritarian father drew for them but to him, it was necessary and therefore, alright. Orvelin plays the upright, religious, successful sister, at odds with the more rebellious younger sister.

As the heat escalates, the characters’ desperate defences begin to give away, leaving the truth bare: each of them gave up on and failed their brother. If one did not call for months on end, another did not return his call a day before his death. What becomes most clear is that beyond everything else, all of them are scared of a dead man and everything his life and death represents.

Through all of it, Antoine remains the most composed, although his sorrow has its own, quiet expression, almost as though he had the closest perspective on the dead man. In an interesting move on the part of the filmmakers, his is the most untidy appearance, while the others look immaculate or at least like they took the time to prepare themselves.

What gets you about Funeral isn’t its nifty design, but the statement it so effectively makes with it; that though the truth, ugly though it may be, could be in plain sight for all to see, one might miss it until it’s all over and too late.

Sonny Nites is the Best There’s Never Been: Slick Comedy About Self-Exiled Stars

Sonny Nites is the Best There's Never Been: Slick Comedy About Self-Exiled Stars