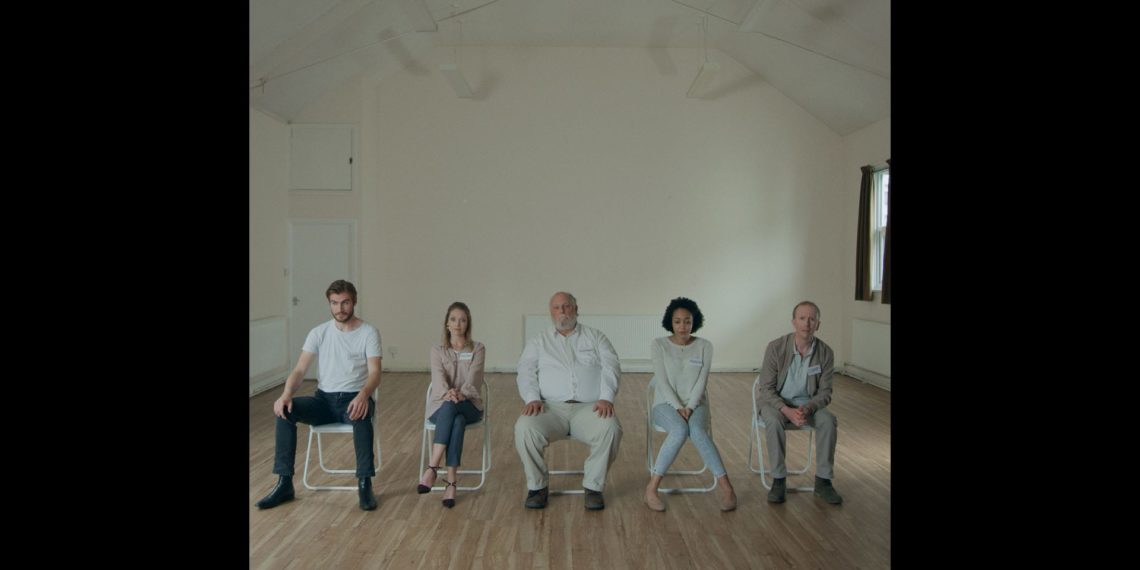 A man hurriedly walks in and takes a seat beside four other, perfectly placid people. He wears a label that says ‘Chimp’. In Ian Bousher and Theo Gee’s Aping, everything comes neatly labelled, and sent to hell just as neatly, with surgical precision. The premise is simple. How would you act and react in the presence of your peers’ actions?

Based on an infamous experiment, Aping maintains controversy with an unerring grip on the narrative. Five participants – Lion, Penguin, Elephant, Dolphin, and Chimp – undergo a test on conformity. One (Chimp, played by Tim Scragg) rebels. But – and this is where the film is remarkable – he rebels by following his peers, by violently exploding but remaining within the defined lines of the box.

The irony is beautiful and its expression even more so. If the screenplay is stellar, Aping’s cinematography and editing are what give it visual shape and hold it up. DP Alex Metcalfe uses a gradually widening aspect ratio (limited to 4:3) and a desaturated palette, which gives the film a look of medical sterility. The 4:3 aspect ratio has the subtle echo of an older time; but that it began smaller and progressively widened, is a skilfully used device to symbolise the plot’s ever-growing chaos. Aping might just remind you of another film that touches upon conformity, Lumet’s 12 Angry Men (indeed, camera angles are similarly used). Without much in the way of meaningful dialogue, Richard Losberg has edited the film to build up the unhinging of the character(s) while retaining its comedic tone just enough for it to be funny without losing its aim. Scragg delivers chaos with operatic smoothness, complementing the visual design of the film.

The supporting cast – Sally Horwill as Penguin, Paul Mansell as Elephant, Julie Rose Smith as Dolphin and Jean Camenen as Lion – is excellent. While Mansell’s Elephant remains mostly quiet, the rest have distinct personalities and all count for a large portion of the film’s richly drawn plot. Each stage of the story is unpacked within little neatly marked chapters, and it unpacks with utterly natural progression. By the end, the characters are dishevelled, the story is dishevelled, you are dishevelled.

#ShortFilmReview: 'APING': "A lion, a dolphin, a penguin, an elephant and a chimp walked into a room…" Click To Tweet