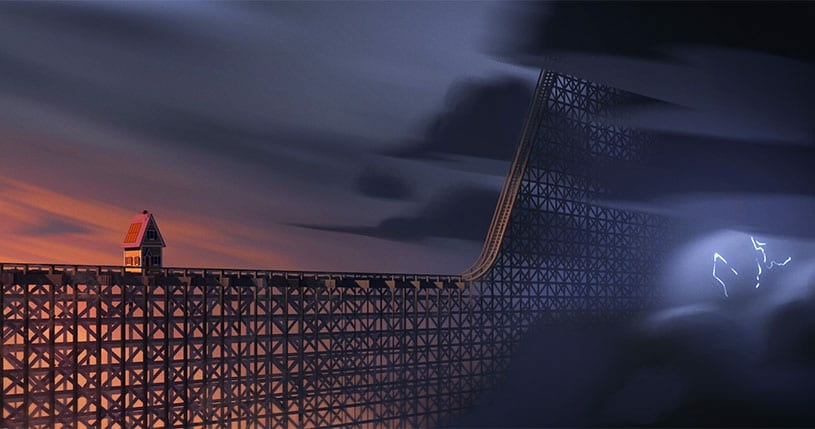 If 2015’s Inside Out made literal characters to portray its protagonist’s emotions, Amos Sussigan and Dan Lund’s Coaster sees their protagonist taken for a literal ride by life. John Doe, recently graduated from college, navigates the ups and downs of his life, all while living in a house that is stationed on roller coaster tracks.

John keeps a neat house, while his mother’s voice (voiced by Andrew Levitt) rings through the house over the voicemail. Through her, we know he has been practising to be an adult for ages before he ever actually left home, and the spotless house attests to that. His struggles begin showing up in an entirely different department of being an adult: John cannot get a job. Soon, this begins to cast a shadow on other parts of his life. Bills stack up, he grows increasingly despondent. The shelves are lined with pictures and certificates that attest to his scholarly achievements and a sparkling social life in the past. As his life takes turns, so does his house. Happy? Sunshine, clear sky and a steady house on horizontal tracks. Excited? Brace yourself for a dizzying ride over steep tracks. These tracks begin getting more attention when a certain Jane Doe shows up in his life after he “accidentally” accepts the match on a dating site. Everything in this world is dictated by John’s feelings, so when a photo frame falls on his keyboard and hits ACCEPT on the match, it is a stand-in for his indecisive and yet impulsive feelings about the woman. The kinetics are excellently designed and animated, and it only gets better hereon.

Jane turns up, it is awkward until she shows a penchant for dealing with the turns of the house aka John’s feelings, and the house goes into a tizzy over it. Sharp turns, precipitous falls abound as John’s sex life takes a sunny turn. And yet when the unemployed Jane finds work as a nurse, the clouds return, bringing a dreadful storm with it. John’s house begins to fall apart as bills stack up.

If the animation is top-notch, the screenplay deserves its own adjectives. The writers allow real characterization of its protagonist instead of relying on cookie-cutter tropes. He is neither an awkward scholar with no social life nor does he have it all together. Instead, John is academically praiseworthy and yet has (or had) a social life, he keeps everything tidy but has a reluctance to make himself a healthy breakfast. In short, John is human. His life has complexities that ring true. What makes it even better is that the metaphor is clever (we’ll ignore the obvious plot holes), and is implemented even better.

What Coaster reminds is that like a literal roller coaster, life will throw you for a loop many, many times but it won’t kill you if you are securely in place. Meaning: have faith and — dare we spout another cliche?– believe in yourself. Just remember to get a cool soundtrack for it.

Generations: Multi-Generational Wrongs Faced, When It's No Longer Correctable