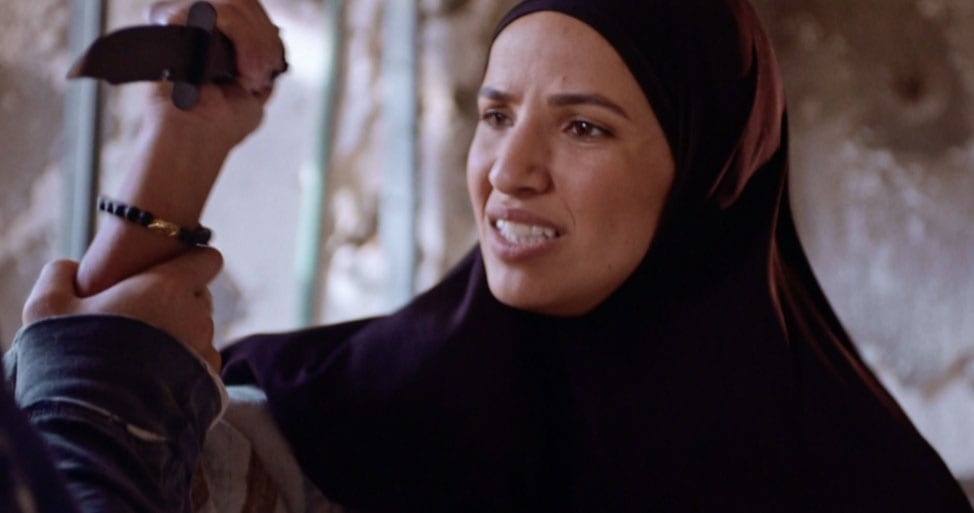 16-year-old Nabila sneaks out of her home. It’s dark and the air feels thick, cautious even. The lovers meet and exchange promises and hopes for a brighter future. Abed (Adam Haloon) and Nabila (Anuar Jour), both Palestinians are prepared for whatever it takes to build a home together. A bracelet is exchanged to solemnize their moments in the dead of the night. Cut to a now heavily pregnant Nabila, who at 22 years of age, is walking along the forlorn streets of Jenin. Her demeanour purposeful, but the youthful hope long lost.

Director/Writer Adva Reichman’s ‘Something To Live For’ (18:11 minutes) follows Nabila from being an amorous adolescent to a determined woman, who, through the vagaries of life that she weathered, comes to realize the true price of sacrifice. Abed is long gone. She is pregnant with their baby. His life seems worth avenging to Nabila. The sentiments, however, aren’t shared by her mother who believes her daughter need not follow the same path, that love need not require one to follow the other unto death. Nabila though, remains determined.

Her Hamas operator Rafik (Mozart Kteilat) prepares her for any scenario. However, as 8-month pregnant Nabila trains using a knife, questions start to creep up in her mind. When her son is prematurely born, the nagging doubts become compelling questions. Avenging her dead husband as opposed to being there for her son remains the dilemma for Nabila, but she is spared no room to wriggle out. Rafik makes it clear that her family will pay the price for her backing out. With no choice left at hand, Nabila makes the defining journey to Tel Aviv with her identification papers and the suicide vest. Her newborn in her arms.

Reichman’s ‘Something To Live For’ is befitting today’s times. It lingers along with the misinterpreted concepts of Jihad and poignant life lessons such as sacrifice and vengeance. To Nabila, motherhood gives her a new lease and then when it comes to choosing between the world and a world for her son, the religion, her husband’s epitaph, her own resolute decisions begin to waver. Without giving away any spoilers, the film is semi-predictable and yet it’s far more chilling than one would expect.

As Nami Melumad’s composition lingers throughout, the final scene closes with a solemn vow, a prayer, a final bid to the world that didn’t give Nabila what she wanted but left her with a hope that it is quite not lost for her son yet.

#ShortFilmReview: 'Something To Live For': Faith can be trying… Click To Tweet
Something To Live For: Story That Keeps Its Characters’ Humanity Intact
4.3 / 5 Stars
Direction
Cinematography
Screenplay
Editing
Music
Tags: ReviewShort Film Reviews
Previous Post