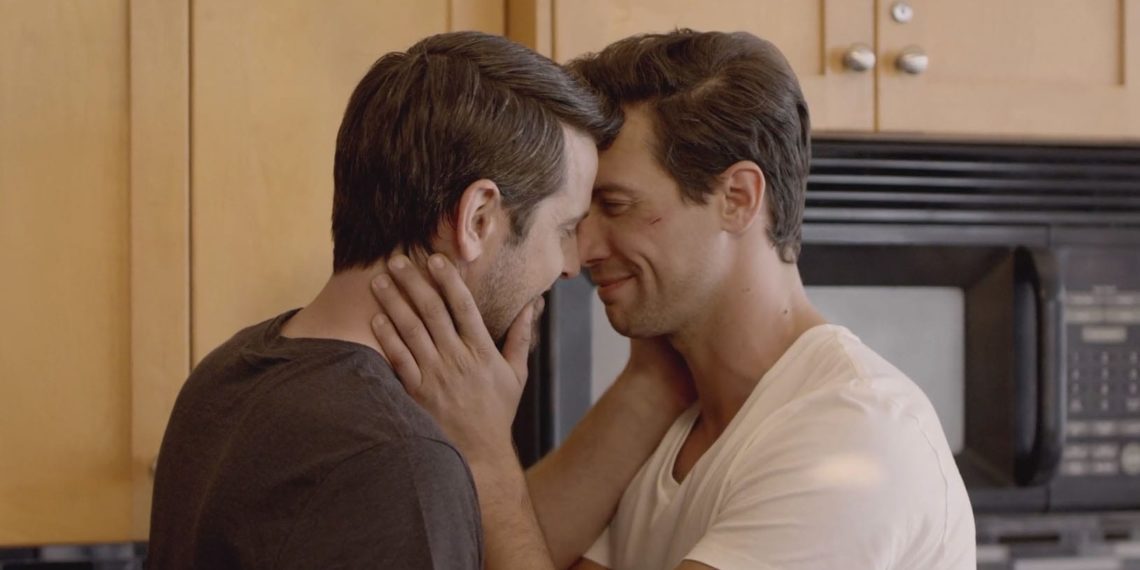 A story that follows Adam and Brian, a gay couple with all kinds of open wounds from being beaten up by homophobic thugs, Jeremy Leroux’s Dominant Chord shows glimmers of insight but mostly struggles to overcome superficial writing.

Country singer Adam, played by Clayton Chitty, is riding the high of stardom when he is rudely confronted with a choice between freedom and continued success. A video of him making out with his boyfriend, followed by an attack by homophobes, is on the cusp of making the rounds online. The remedy? Fly to Mexico on an all expenses paid trip and make out with a woman who is also in need of damage control for the benefit of the paparazzi. The choice is a difficult one. Should he continue keeping his relationship under covers or risk it all for his career? A surprise betrayal makes things harder. Of all this, what becomes clear is that between Adam and Brian, it is almost always about Adam and his life. The happiness and future of the relationship hinge on what Adam and his career dictate. Ending on an almost ambiguous note, Jeremy Leroux’s 8:57-minute film is a decent one-time watch. On subsequent viewings, the little cracks begin to show.

Chitty plays his character with a mix of charm and restraint, playing with the inner and exterior personas of Adam– an occupational hazard. Sean Pogue as Brian comes off as less comfortable with his character. He merely says his lines without delving deeper. The screenplay itself features quite a few less than insightful, tired lines, oft-repeated in so many films and stories, it is hard to remember a remarkable one. Caitlyn Stryker’s performance as the manager is again rather stiff, very visibly reciting lines while resisting a more intuitive integration with her character.

Its opening and closing music is placed well. The film is mostly edited seamlessly (Sarah Hedar). The film opens with a flashforward before going back to follow a linear narrative. Here it creates an absorbing hook, pulling in your attention. Dave Chick’s composition for the film, though it has merit on its own, is not used satisfactorily, feeling often like an unnecessary addition.

Ultimately, it is Dominant Chord’s weak screenplay that ails it the most. At times peculiarly (and peculiarly nuanced too), at times ineffective, the screenplay falls short of bringing the plot to its full potential, of which there was no dearth.