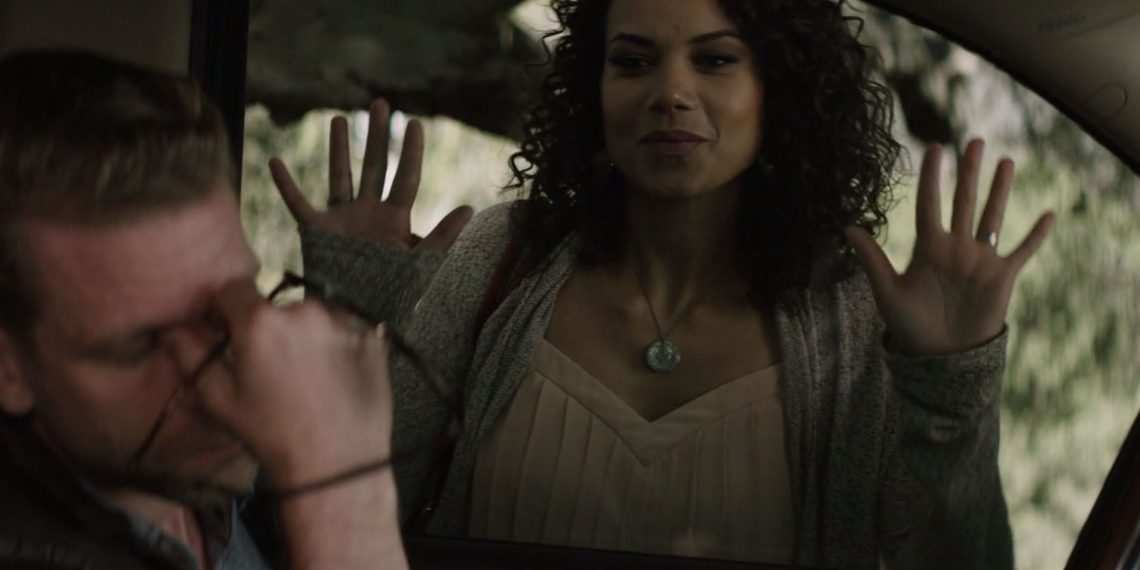 As far as adaptations go, Caro’s short stays laudably true to Carver’s, going so far as to add an original character to voice the protagonist’s textual internal monologue.

Brendan Sexton III’s Phil is a married man, sulking to himself and to anyone who has a moment to spare about his wife’s blind friend who is coming to visit her. Theirs is a friendship spanning over years; they sent each other tapes as spoken letters of sorts. Phil recounts the entire story to his girlfriend, the narrative embodiment of his thoughts. Played by Michele Weaver, Rita is as despicably superficial and crass as the protagonist’s mind was in Carver’s story.

Cat (Jessie Lande) shares an empty marriage with Phil, and yet he finds himself insecure and jealous over her friend, Joseph (Rick Boggs). He projects this through a pronounced discomfort and even irritation at Joseph’s impairment. As he drives to a hotel with his girlfriend, Phil recounts and remembers how Cat held Joseph’s sleeve or how Joseph took his drink or said Cat’s name. Joseph’s marriage with a woman who was not also blind is a topic of jokes and curiosity between Phil and Rita. An interesting choice that Caro makes is to give Joseph’s voice a recorded quality even when Phil has met and talked in real life with him, denoting Phil’s unwillingness to let the man into his life.

Phil never understood Cat’s experience with Joseph, especially a particular moment that was of great significance to her, and it is perhaps this disconnect that contributes to his hostility towards a man he has never met. During Joseph’s visit, Phil has an out-of-body experience of his own with him, which, though he relays to Rita, she does not understand at all. The parallels are impactful, and an addition to the original story. He leaves to go back to Cat, Rita’s last words to him coming as though through a cassette player.

Among other and perhaps more important things, what contributes to Caro and his team’s success with Carver’s iconic story is the preservation of the story’s restlessness. With the addition of Rita, the film next preserves the protagonist’s unsophisticated and crass mind that pervades the story. Although here, Joseph does not feel as alien (because we follow Phil’s perspective, no matter how unlikable the character) as Carver made him be. Sexton is a natural and a casting success. As is Boggs. Their climactic scene together evokes a strong, emotive response in a viewer.

Cathedrals leaves its viewer with a better sense of how Phil has changed than Carver’s abrupt non-conclusion does, and yet while Carver left one with wonderment, Caro chooses to end on an uneasy note, by no means florid.