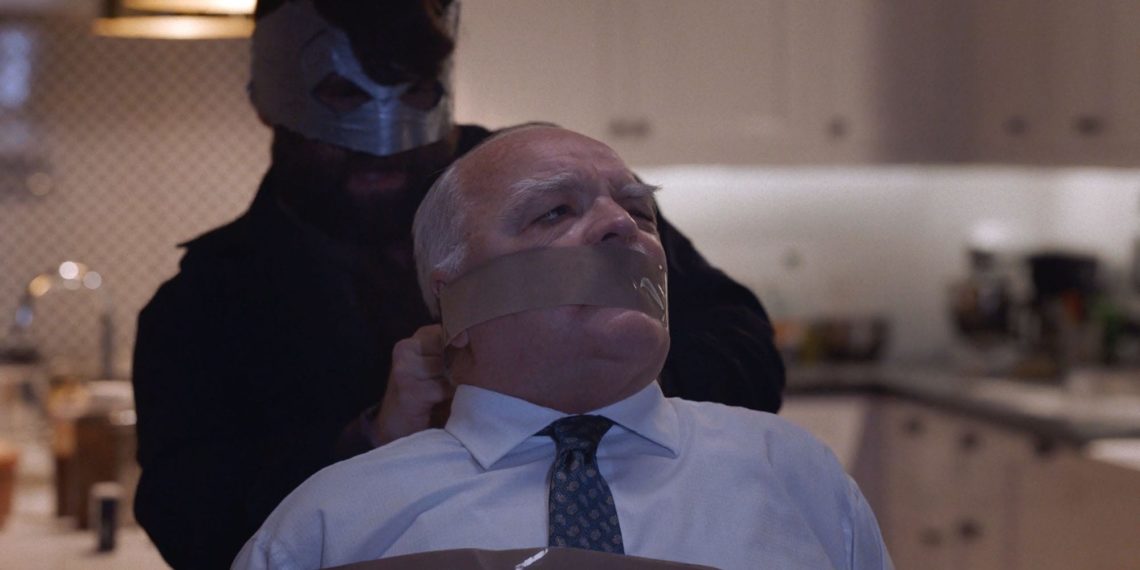 502 people were laid off at a factory, including the employee of the month. One turned to vengeance – with DIY masks and packing tape. Chris McCaleb’s 15 Minutes at 400 Degrees sees an unemployed single father turned hapless robber try to avenge his firing a year ago by robbing his erstwhile supervisor.

On the night he makes lasagna, revenge comes calling. Very angry and very ill-fitted for this particular method of venting, Buddy (John Gemberling) lands a punch as a greeting, proceeding to tie up his intended target with packing tape (John literally licks some of it off). What Buddy was not prepared for (among other things) is the person witnessing everything from the safety of a screen, perfectly capable of not only recording his actions but also to find out who he is, down to practically the brand of his underwear. The ensuing back-and-forth is a mix of comedy, quasi-thoughtful commentary on the age and society we live in, and a step-by-step on CPR; turns out being respectful to Crystal has its perks. Who knew.

Writers Carmella Casinelli and Douglas Cheney successfully create enjoyable characters, none of them perfect people, but interesting nonetheless. Cinematographer Meena Singh keeps things simple, letting the story do the talking. Buddy and Crystal’s interaction is amusing, but not without substance. Both of them judgemental, both down on their luck and both smugly looking down on the other. Amidst this, sweet, harmless John becomes the factor that brings these two together (no romantic subplot here, half-assed or otherwise). Gillies, Gemberling and Riehle all turn in well-timed, believable performances. Gemberling has to do the most; he meets all the marks but does not surprise.

15 Minutes at 400 Degrees takes the time to tie up its loose ends, although, for the sake of comedy, faulty logic is ignored. Fortunately, its comic elements manage to remain restrained and comical.