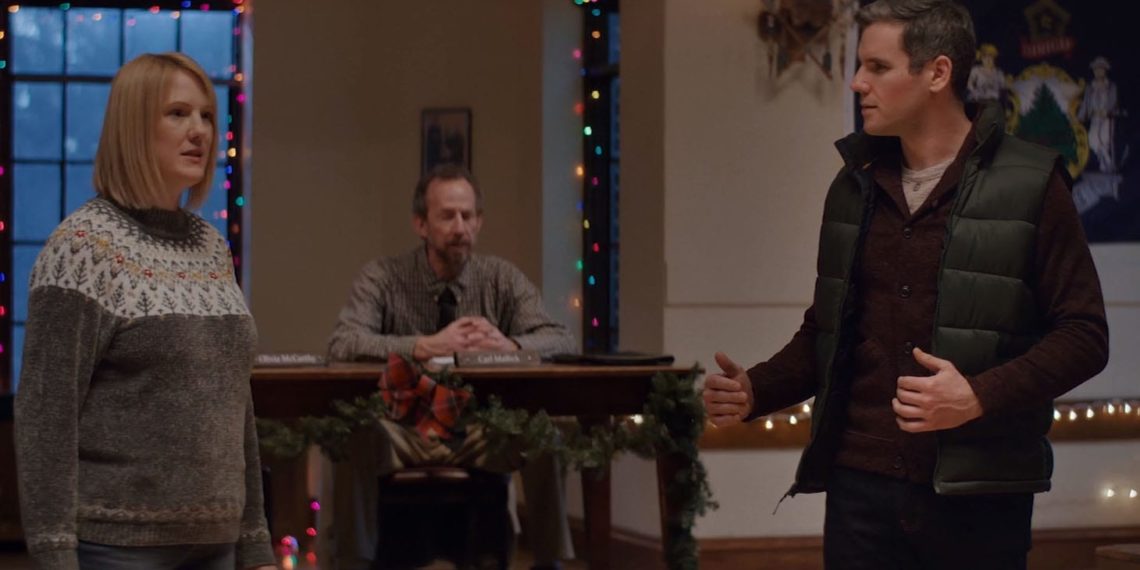 Town Hall. Casey Lock styles this story of townspeople affected by corporate greed like a courtroom drama. In a small town, the city councillor is retiring. A kindly man with a booming voice, Carl (Steve Herson) is being replaced by his colleague, Olivia (Robyn Coffin), a woman on the Vinci company’s trail with the certainty that they are strategically displacing the townspeople to develop according to their own agenda.

The drama unfolds in the town hall at their meeting. Present are the aggrieved and the curious locals, and a representative of the Vinci company, Jackson Taylor (Sam Guinan-Nyhart)– the perfect setup for a tense courtroom drama (all the more gripping for its realistic treatment). Michael J. Weldon’s cinematography is particularly remarkable. He stages shots in a way to signify power dynamics; the trial-like setup is also the product of mindful staging– Carl is even positioned such as to overlook the procedure while Olivia and Jackson argue and present their sides in front of a sceptical gallery. The prelude to the ensuing drama is composed with great thought and skill as well. Establishing shots are kept to a minimum letting the film jump to hint at both their history and the future.

Without any music, the film feels sharply real. Lock, who has also edited the film, displays a fine understanding of what makes a viewer tick, both visually and audially. Here, one is especially reminded of the closing sequence. Using a mundane sound as a carryover to the credits leaves the audience heavy with the after-effects of Carl and Olivia’s conversation and the mind-boggling twist (particularly remarkable for the nonchalant delivery).

Coffin herself delivers exceptionally well. Both unassuming and forceful, she plays Olivia with a naturalness that both befits the film and elevates it. As her opponent, Guinan-Nyhart’s Jackson is written to be the quintessential corporate lizard-devil’s advocate, and he emanates just the sort of oily politeness that is nearly beguiling and simultaneously infuriating. Herson’s Carl ends up as the unlikely father figure– alternating between warm and disappointing. Herson starts off well, but as the drama begins to peak, he goes ever so slightly overboard; it is not particularly jarring and almost believable, but not quite.

While the characters are written with skill and insight, the plot itself required some fine-tuning in the middle. Yet Town Hall is an exceptionally well-crafted short. Only 22 minutes long, the plot does not feel rushed or half-developed. Characters are developed with a naturalness, while balancing each other out and further still, playing up thematic elements of the story.