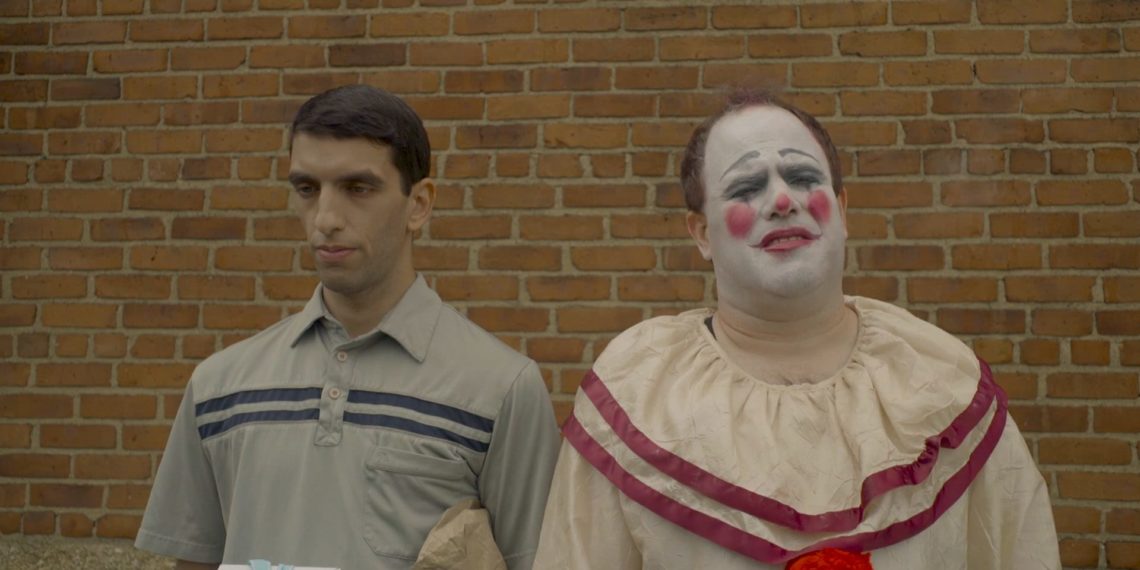 Two men stand across the road from each other. One very tall, very lanky Abdul and one very creepy clown, Harpo. As the hours pass, Abdul finds his life turning increasingly more complicated as he must confront difficult questions about his boyfriend.

A rather bleak description of what is actually a terribly entertaining film – that is, if you can get over the baffling conclusion. Even the ending is just audacious enough to leave you amiably shocked. Ziyad Saadi’s mystery-comedy ‘Don’t Open Me’ follows a boring day in Abdul’s (Ziyad Saadi) life, compelled to stand by the side of a road to pick up packages, interspersed by the intrigue of the packages itself, the tension and mystery escalating with each delivery.

‘Don’t Open Me’ is designed to be visually striking. Cinematographer Tony Sur uses lots of negative space and a wide-angle lens to lend the film its idiosyncratic, humorous look. Saadi has written Abdul to be the sceptical, “normal” character in a land of outlandish characters and situations – the stand-in for the audience. He plays Abdul with precise comic timing, brimming with delightfully deadpan humour.

One of the many intrigues of ‘Don’t Open Me’ is the clown across the street. Harpo (Julian M. Kheel) stands around as Abdul stands around, a sinister presence. When framing Abdul, the film goes all out Wes Anderson, while Harpo is framed with the most regular looking background and colour scheme, making him stand out all the more. Kheel infuses his character with all the caricatural beats of a washed-up clown.

‘Don’t Open Me’ comes with razor-sharp writing. The dialogues, in themselves unremarkable, work in tandem to create a sum far greater than its parts. As the editor, Saadi performs admirably. The film relies heavily on visual comedy, and its crisp editing significantly elevates the whole affair. Each messenger (Alec Hynes, Kathy Biehl, Gwenevere Sisco, Noriko Sato) seems to pop into existence and disappear just as abruptly, leaving the audience terrified and amused in their wake. Jorge Palomo’s score works to evoke suspense – another factor that contributes to the film’s success.

Saadi’s ‘Don’t Open Me’ could easily have failed. It was one of those films that, without just the right balance, would topple shamefully. Saadi does a fantastic job holding everything together.

‘The Audition’ Is A Comedy Short On Two Brothers!