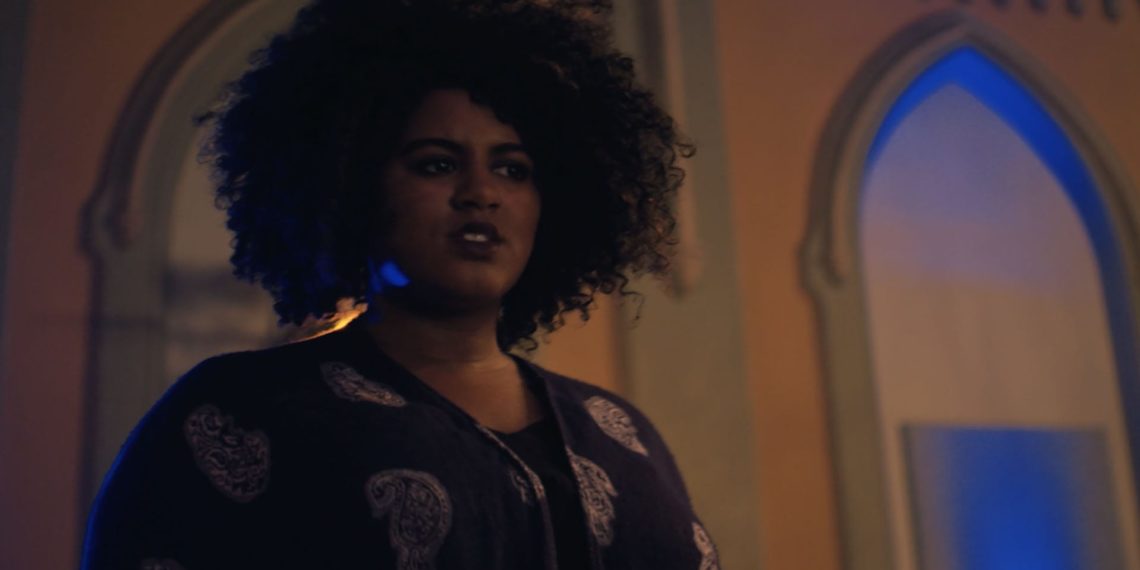 Steven Alexander Russell’s short horror flick, The Dark Strums indulges in the legend of famed singer-songwriter Robert Johnson, who died under mysterious circumstances at 27. As the legend goes, Johnson sold his soul to the devil at a crossroads to master the guitar. Russell does indulge, merely indulge, for it goes no deeper than that.

Divided into two parts, The Dark Strums first follows Robert himself (played by Damion Rochester), courting his sweetheart, Sylvia (Kayland Jordan) who asks to be played to. Here we are introduced to the already burgeoning myth of the origins of Robert’s skills: people at the church are talking and they aren’t saying nice things. Robert begins to play, Jordan’s character is taken over by the devil and we cut to the next half of the story. Olivia Griffin plays a struggling guitarist, Elma, who finds Robert’s guitar in an antique shop.

The music in Griffin’s part of the story is incredible, one of the few striking aspects of the film. Robert comes back, perhaps gravitated towards his guitar. Elma’s story takes a dark turn with Robert’s return – or perhaps he was never gone, and we are only seeing one slice of the whole cake. A suicide takes place and another character suffers the same fate as Sylvia, while Elma stands at a crossroads, looking down at the path of fame, but at what cost?

The first half is more likeable than the second, as dialogues or story structure goes. Jordan plays her character with a carefree assuredness while Rochester emanates a dark magnetism that is becoming of his character. With the approach of the second half, the story ceases to have any emotional impact. Editing becomes incoherent, sometimes reducing the story to being told rather than shown. The plot progresses (with unseen, unbidden jumps) but fails to inspire horror or chill. Music firmly holds attention, but only so far.

Robert Johnson is largely a plot device in an incoherent story. The Dark Strums delves in no character or story long enough or deeply enough for it to speak to the viewer, ending up instead as a visual checklist of plot points.