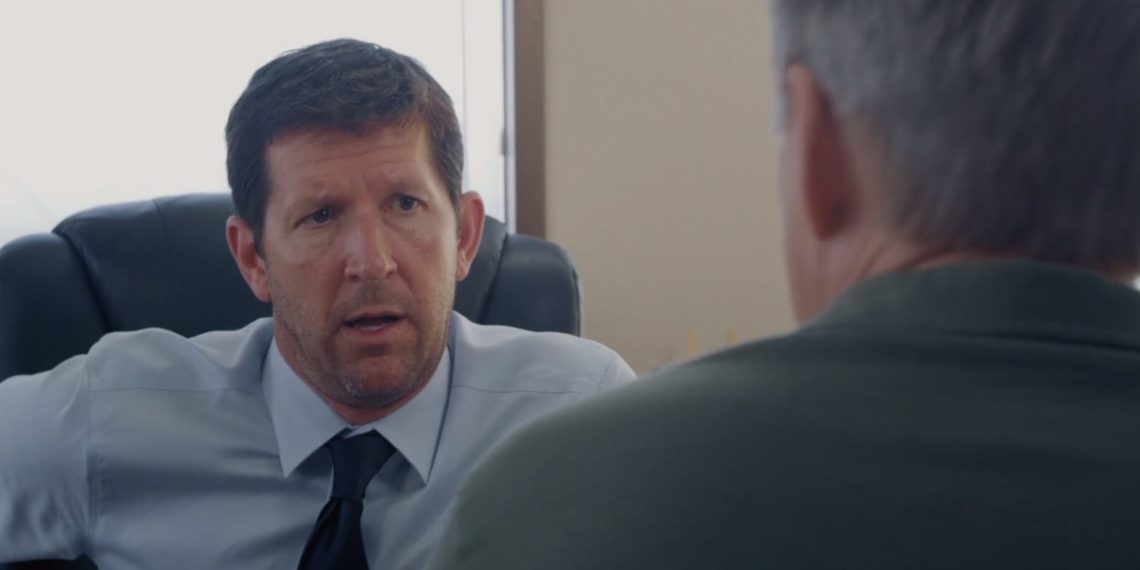 There is plenty of scope for humour in a marriage. With every century and decade, as with everything, the dynamics between spouses evolve and fresh fodder for humour emerges. Michael Wells’ ‘The Card’, a comedy centred around a marriage, belongs firmly in the already cringy aughts.

Phil Whitfield (Steve Oreste) finds a certain business card at home and immediately worries about the end of his marriage. As he mulls over the possible reasons, his friend, Tony (a very loud Richard Remppel) walks in unannounced to seek help out of yet another tight spot. He’s that friend. Tony is obnoxiously loud. If you close your eyes, he brings Owen Wilson’s Dupree to mind. Except Dupree was likeable.

The best reason the two can come up with is that Phil’s wife, Sarah (Tevy Poe) has taken a fancy to the swinger lifestyle, thanks to their swinger lifestyle. Their solution? Add another man to the equation. Enter Akbar (Sai Gundewar). Up till then, Mark Daniel Dunnett’s score was interesting but unsuited to the premise or the execution. Upon Gundewar’s entry, it walks the overtrodden path and introduces Middle Eastern-influenced music. The film drags its feet all the way through. Oreste, demanded by the script, plays a restrained character but it is poorly delivered nonetheless. Remppel is too old to be quite so chipper and perhaps he knows it too. Danny Kutnink’s framing makes everything all the more awkward. Kutnink’s visualisation is otherwise mostly bland and leaves no impression. The climax and resolution are so boring and stale, the viewer finds their focus straying. Poe has all of two appearances in the whole plot and both come with uninteresting writing. Editing might have cleaned up a lot of the meandering plot, but it disappoints and the film runs to a whole 15 minutes.

The fundamental problem with ‘The Card’ is its script. Not only is the premise ancient and uninteresting, but the dialogues are superficial as well. There is no character development or depth. Everyone is a cookie-cutter stereotype. Wells also keeps the nature of the business card a secret but it adds no significant intrigue to the plot and the final reveal is less than rousing. If you are besieged by nostalgia, you could give ‘The Card’ a try, though no particular satisfaction can be guaranteed.

‘The Card’ Is Best Suited To Those Looking For A Waft Of The 2000s
2.5 / 5 Stars
Direction
Cinematography
Screenplay
Editing
Music

‘Glass’ Is A Heartfelt Film That Deals With The Pain Of Loss.

'Retrieval': A Deftly Constructed Drama That Is As Suspenseful As It Is Affecting