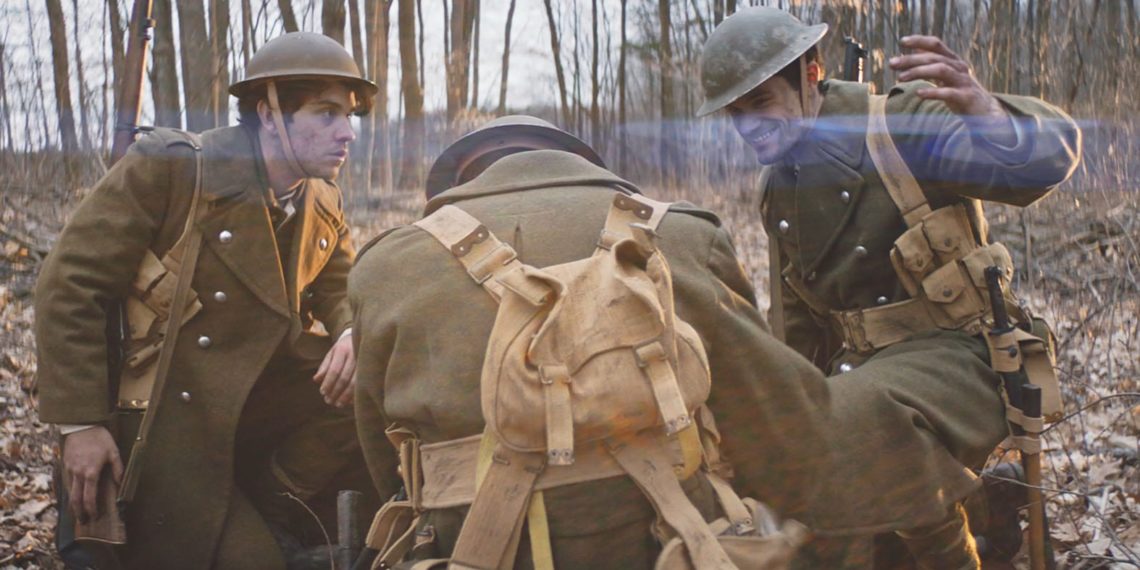 Director Daniel Everitt-Lock in collaboration with writer Sean Meldrum crafts this excellent story of the place of empathy in a gruesome war.

There are almost no dialogues (certainly none in the crucial, most dramatic moments) in ‘From The Thunder’, a 9:32-minute film. Set in WW1 France, four soldiers bring four different perspectives on war. The uncaring Hayward who has no qualms about death (Neil Paterson), the simply empathetic Kitchener (Alexander Oliver), and the embittered by experience Ellis (Sean Meldrum). Three soldiers on one side, with a tortured Keller (Jacob Hogan) on the other. Three Canadians and a German. In lighter settings, this would be a premise for a joke. Not today.

Instead, this is a poignant film with razor-sharp build. Kitchener and Hayward run into fellow soldier Ellis, exhausted and tormented by the ravages of war. Ellis has suffered gruesome injuries and his face bears their fresh scars. They take shelter from the rain in a barn. What they do not know is that enemy soldier Keller is nearby, as tormented as Ellis is. Introduction to Keller brings out each character’s key qualities – an excellent feat of screenwriting.

Jacob Hogan and Sean Meldrum (as an actor) steal the show. Their brief interaction is brimming with unspoken accusations, bitter regret and the most acute pain. The background score is intense and at its most emotional. Everitt-Lock places you directly in both characters’ shoes and you are afforded a chance to experience each perspective. It is a stark experience.

There is something sacred in Hogan and Meldrum’s meeting, and each individual element of ‘From The Thunder’ protects and contributes to it.

In a sense, it is ironic and yet utterly human to watch enemy soldiers (people) caring about an enemy’s suicide. War films always work to move you but in 9 minutes ‘From The Thunder’ accomplishes this with wringing pathos.

'I am Mia' Is Yet Another Take On The Beautiful Mother-Daughter Relationship!