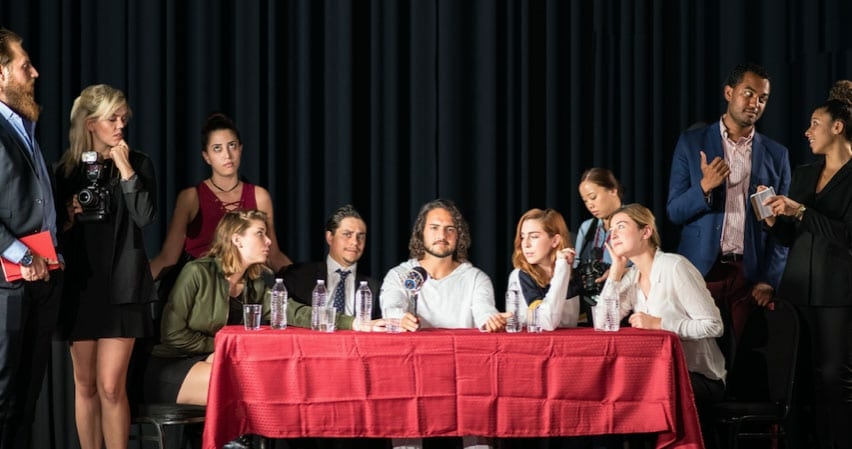 What if Jesus Christ was to make a reappearance one of these days?

‘American Parousia’ is a comedy miniseries that follows an aspiring actor, Miguel, played by Esteban de la Isla in his all-consuming quest to become a successful actor, even though he has been told, more than once, that he is no good.

The film is driven by his unending passion for acting and his nonchalant attitude towards any and all criticism. When the film opens, Miguel is already deep in his Christ avatar. The press is hounding him and his “manager”, Juan (Reinaldo Garcia) for answers. A tense entry prompts a flashback to a year ago and we get to see oblivious, arrogant Miguel ready to attack any critics of his performance. Struggling to pay bills, he launches into a monologue (his favourite) to convince his roommate, Juan to take part in his lofty new plan to win over the world with his adaptation of the biggest bestseller in the history of mankind. The Bible.

Written and directed by Guillermo Noriega, ‘American Parousia’ is great for a pilot. It sets up a humorous premise (though Miguel is often insufferable, even too much so) and concluded on a cliffhanger.

Winner of a number of awards, there is quite a bit to like about ‘American Parousia’. Daniela Gerdes and Garcia are both almost flawlessly funny, thanks to both of their performances as well as to well-written roles. Miguel is obnoxious and it is yet to be seen how his character plays out. De la Isla delivers a decent performance, though he shines in his Jesus avatar. This new and updated Jesus in a hoodie is most riveting.

What does not work for it is the editing, slowing down the pace of a story that could do with a shorter runtime (16:14 minutes). Noriega’s script too is rather weighed down by quite a few bland lines. Alex Mateos’ cinematography works well for the most part, though there are a few missteps. ‘American Parousia’ comes with an entertaining soundtrack, that has a distinctly Western influence in it. Certainly, it shall pay off by the time this miniseries wraps up.

'From The Thunder' Is A Poem On Humanity