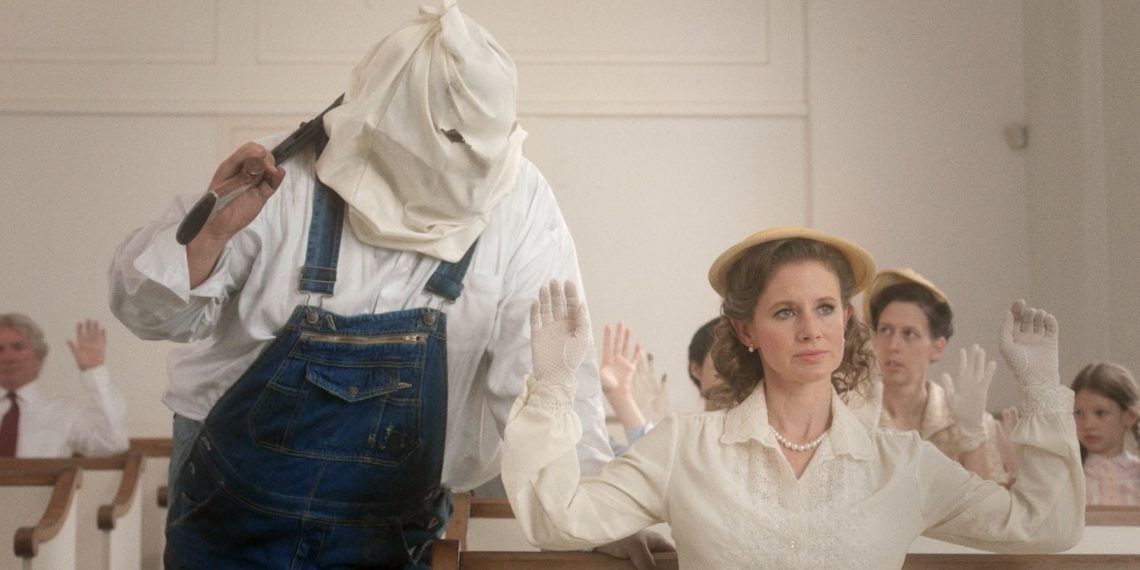 Anthony Codispoti’s ‘The Baker Brothers’ is a hysterical caper at 9:11 minutes. Set in Alabama, the film opens to David Morckel’s unquestionably playful background that straight transports you to the 1950s’ and the ‘Cotton State’. Also written by Codispoti, ‘The Baker Brothers’ centres on the film’s namesake, played by Alan Baker (Dallas White) and Eddy Baker (Tim Harbolic) and their ridiculously outlandish plan to rob, ahem, a Church. If this alone doesn’t set the tone of the hilarity for you, the acting certainly will.

Perched under a tree, munching on their snacks, it seems an ordinary day in the brothers’ lives, almost like a ritualistic round of siesta. But, then suddenly the tone of the film changes from lightheartedness to mystery to horror to comedy within seconds, as the brothers put on their mask resembling no less than the members of the Ku Klux Klan! You see, the brothers have come with an ingenious plan to execute robbery, in broad daylight! And, the cherry on the top is that there is no plan!

Codispoti’s ‘The Baker Brothers’ will definitely remind of the famed Laurel and Hardy duo, with Alan carrying the undertones of Hardy and Eddy of the childlike Laurel. The film doesn’t rely just on slapstick humour, instead through its storyline of a foiled robbery attempt; Codispoti deftly manages to squeeze in incredible character roles for his actors. That the brothers are prone to goofing-up is made clear pretty much within the first few seconds of the timeline. And, as the story progresses we see them going about their plan in the most clumsy way, making it apparent that not only is this their first ‘grand’ heist, but the closest they have ever come to getting any job done, albeit not to anyone’s satisfaction!

Tim Harbolic tickles the audience with his ditzy character of Eddy Baker, annoying his brother Alan to a point where neither Alan nor the audience can handle him anymore! And, Alan with his quick witty responses makes up for the smart one-liners the film needs.  Regardless of the screen time given to the actors, regardless of how minuscule they might seem, all the scenes, be it that of the pastor (David Gaylor) or the sheriff (Bruce Purcell) are all well-written and incorporated with ease without making a caricature of them. Needless to add, Marie, played by the brilliant Jessica Ambuehl becomes the focal point of the film, at least for one of the brothers and it doesn’t take long to notice their plan going kaput.

Codispoti’s writing with its punch lines, the witty sarcasm and wonderful character depth, despite the obvious genre, are brilliant. The beauty of his screenplay shines through as he lets his actors breathe outside of the pages of just funny lines.  The camera work is exquisite, capturing the interiors of a Church and its unwittingly held hostages. Contrary to general public opinion, comedy isn’t the easy genre it is put out to be. It takes great effort and skill to manoeuvre a story without reducing it to mindless jokes. ‘The Baker Brothers’ is a light-hearted comedy that not only manages to bring a smile to your face but also reminds you of the good-old Hollywood capers that are missing today. Be it the production design or the wardrobe (Stephanie Keller), great care has been taken to recreate the charms of a bygone era. The attention to details given doesn’t go unnoticed.

You didn’t know how much you needed ‘The Baker Brothers’ to set you light today!