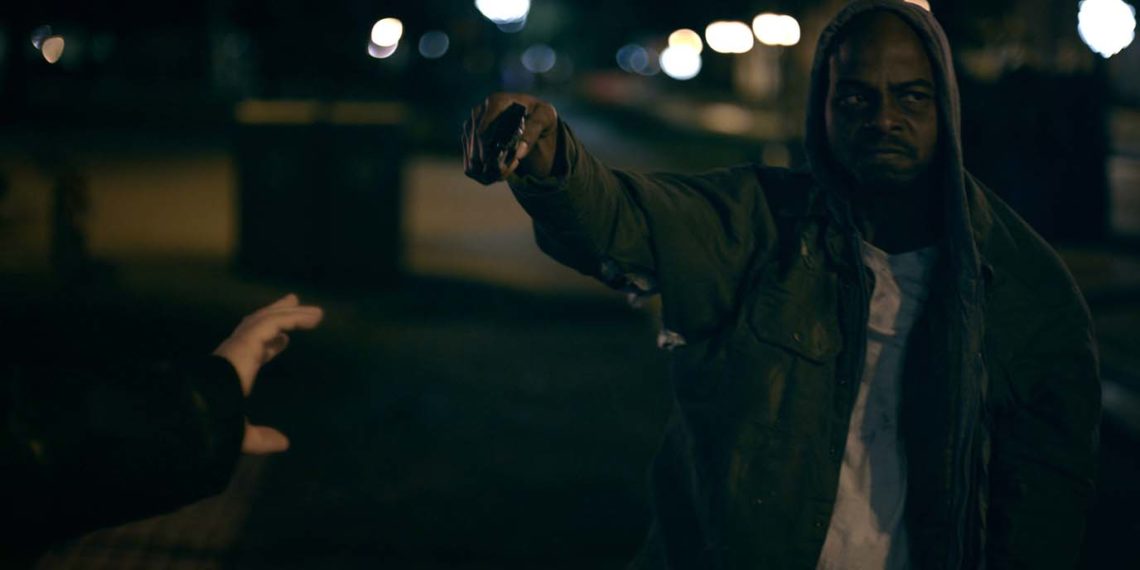 Hitting rock bottom and then incarcerating yourself in the deepest abyss of regret and guilt as you wander across aimlessly in torn clothes and with a broken spirit; that’s director Travis Hadley’s ‘Fragile Like Concrete’ main character. Presenting the pitfalls of a drug addict as he plunges into the gaping hole of absolute madness in the rawest sense, the film at 16:09 minutes is difficult to watch, more so because you know this is the hard reality faced by many. Co-written by Travis Hadley and D.E. Xavier, the dialogues are riddled in a crass tone, fittingly so, to spawn out the frustration of the characters. It ditches the stereotypical portrayal of addicts, resorting instead to showcasing their painstaking struggle of surviving a marginalized life havocked by the curse of drugs.

The story puts us in the shoes of a certain Pete Battles (Reggie Peters) who has been thrust deep into the world of drug addiction. Having wandered so far into this world, his return seems unlikely. A slave to his own poorly made choices, the very opening scene of the film leaves you gasping for air as you realize the horrors of what is left of him… Once out of his slumber, his putrid existence disgusts not only those on the streets but also himself. Upon realizing that all hope is lost, he returns to the only person he knows, who can save him. Enter Titus Jones (Darren Constantine), Pete’s former best friend.

The writing of ‘Fragile Like Concrete’ takes away the prize. While delicately addressing the mind of a soul lost, it ensures to not make a caricature of the character, instead lets the audience linger in each frame soaking in the despair. As Pete tries to reunite with Titus, although in questionable ways, you see a sense of honour in the man as he tries to not put a strain in Titus’s very distant and happy life with girlfriend Ashley. At this point, you would expect Titus to be the one who sets Pete’s broken moral compass straight and make him see the light. But that’s where the brilliant writing takes over as the wall of prediction is pretty quickly demolished with Titus’ indifferent attitude.

As Titus treats the situation like any other Tuesday and Pete like some trash that needs to be discarded, one can’t help but think of friendships and redemptions and wonder if this one is ever going to last the test. The plotline heavily paces forward from here, with revelations that change the dynamics between the duo and with the secrets tumbling out comes the deepest understanding one can have of the characters. As the peachy clean image of Titus is shattered you begin wondering about the moral compasses of men, in general. Cinematographer Stephanie Pons’s camera goes back and forth in the dark as the two men come to yet another impassable turn, only this time, it leading to a definite outcome.

Ricardo Cortez-Ortiz’s editing could have done more with sharp cuts, but nevertheless, Antoine Breadfruit Khouri’s outstanding music compensates. It sets off the tone of the entire film, sort of warning you of what is to come. Without giving away any spoilers, the climax isn’t something you’d have come prepared for, regardless and Hadley sure knows how to make you invest in his characters.