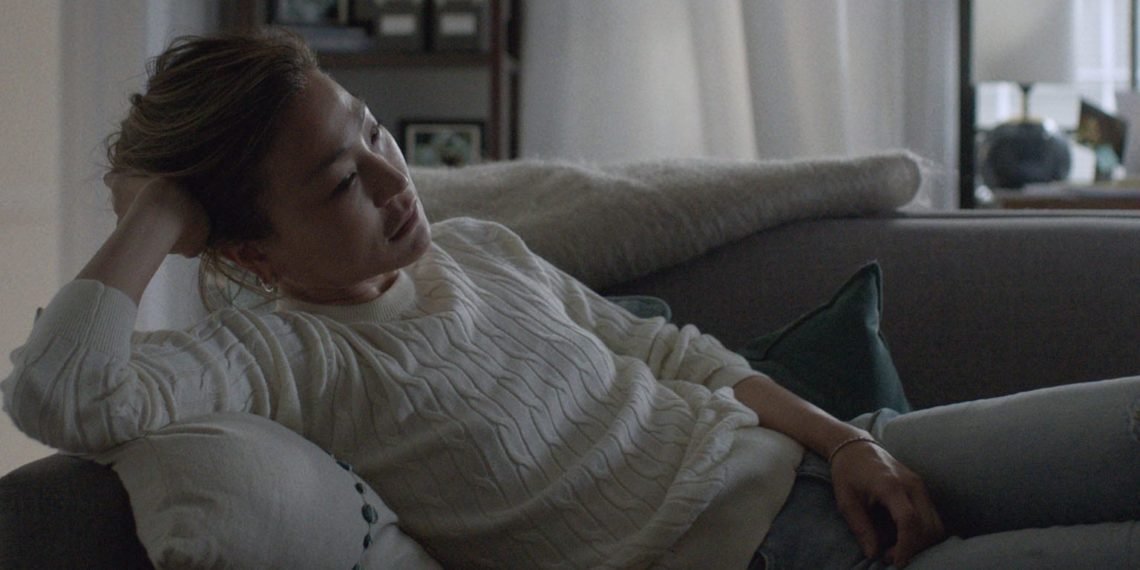 You hear Xueran Chen’s composition even before you see her face and the music prepares you for what is to come. Christine Chou (Jeanie Lim) is being interrogated. And, as the camera uncomfortably lingers close to her face, we see the tears, the desperation, and the broken-fragile piece that is our character. Director Shu Zhu’s ‘Moth’ is about the dual life of a woman who is at the sunset of her career, trying to hold onto the dying embers of what was once a glowing professional life. While the theme sounds familiar to many others that have dealt with women being typecast in the film industry and/or dealing with sexism, age and gender parity, Zhu’s ‘Moth’ pushes the envelope. Trudging on the lines of fantasy and spirituality, Zhu offers answers, by raising the questions…

Co-written by G. Wilson & Shu Zhu, the film at 16:54 minutes is a fitting tribute to the countless seeking a sense of validation or catharsis from the complex lives they are hiding under. Take, for instance, Christine, once a successful star but now a struggling actor, trying her best to retain her foothold in an industry that is keen to replace her with the younger lot; she is the archetype of complex characters that often times remain misunderstood in both reel and real… The very opening scene showcases her nearly fragmented demeanour that she is barely able to hold on to anymore. And, as she returns home to her family, the stark contrast is plain for all to see. The mundanity of her daily life is so far away from the world she feels she belongs to, that it doesn’t take a genius to predict the descend. Guangwei Du’s editing, laced with Anderson’s lensing offers the grim reality of Christine’s life, painful to watch, even more, painful to absorb.

Zhu brings out the raw, wounded core of Christine for all to see and there couldn’t have been anyone better than Lim to play her. We see through her lies, her quivering mannerisms and telltale signs giving way to the chaos that her mind is in. And, as we walk with her, through her daily chores, juxtaposed with the famed nightlife of the showbiz, we see the cracks beneath the veneer and we shudder at where it is likely to take her… and us.

Zhu’s ‘Moth’ is remarkable not just because of how sensitively it approaches the subject but also because of the depth, complexity and intricacies with which it weaves a tale of the underworkings of the human mind, the deep connect of the soul to everything around it and its ultimate goal to set itself free. As the climax approaches, the spectacular scene unfolds leaving this moth glowing in its own flame…