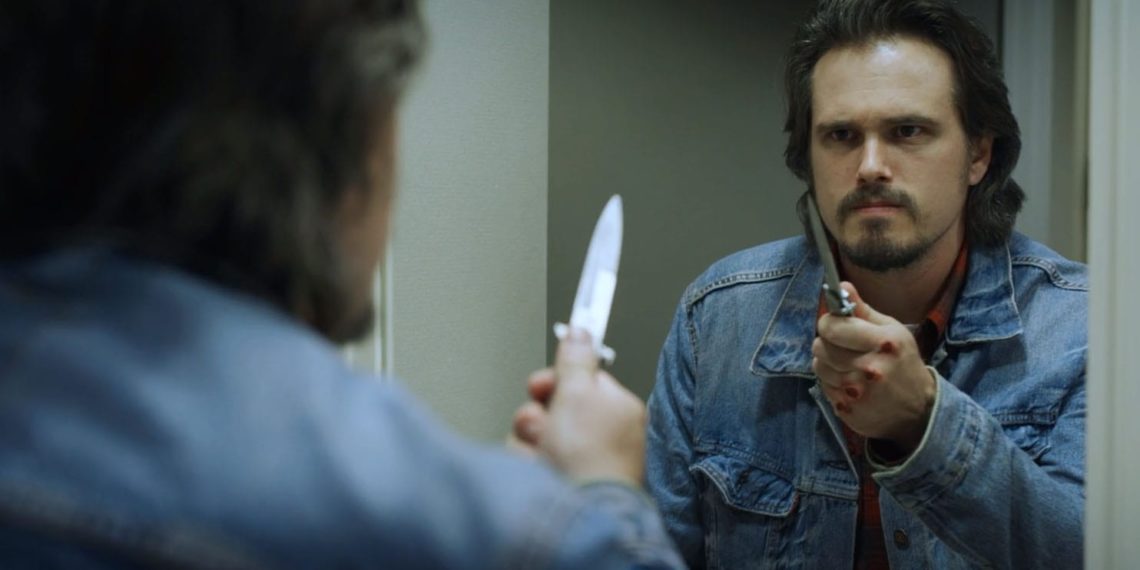 He is not just another man; he is not like any other man. He has the confidence to turn tables and make you doubt yours! He is none other than Johnny Colorado (Daniel Baldock). Yes, you guessed it right! The man with the guns and knives for keep’s sake! Like the title of this film, our Johnny Colorado remains the character and the story in himself. This short is the directorial venture of co-producers Michael Benton and Alejandro Espinoza who also enjoy the credit of writing it.

In 18 minutes and 34 seconds, the story straight plunges into the interview of Johnny for his job hunt which ends at an ATS consultancy firm. There, Mr Reynolds (Doyle Reynolds) awaits him, unbeknownst to what is actually about to hit him! Initially, Mr Reynolds thinks less of Johnny and is nearly convinced that he has got the worst candidate possible. And, why ever not?! Johnny’s skill set, education and work experience is an open testament to that. Cut to Johnny’s open booze fest and you’d be convinced of it too. But it seems our Johnny is the master in the art of persuasion. And, suddenly, Mr Reynolds is convinced by this rogue, ill-mannered and ridiculously behaved candidate and the rest is history!

When Johnny was at his best; the job offer was a distant dream. But, suddenly, with the appearance of his true colours, that distant dream turns into reality. It’s no less than a miracle! The progression of the movie does not give a chance for its audience to think twice or connect the dots. Is the storytelling going with the flow or is Johnny building castles up in the air? What could possibly be the reason, for an unskilled man to grab a job that too in an economically driven, competitive market, one may wonder?

The short makes for a wonderful sketch. Johnny irks you, irritates you and yet remains a likeable character. The character development of the titular role shows intermittent growth. Johnny’s dialogues are at times so irrelevant that it is noticeable the writer-director duo is trying to stretch the story and its narration. Though Baldock is convincing in the act, his execution falters in style, at times. His subtlety in his performance is where he wins the audience over. Both the characters have equal screen presence, which is commendable and rare. Kudos to the writing for that!

Espinoza as a cinematographer does not offer much. The mid shorts, medium close-ups and close-up shows do not leave any cinematic extravaganza. Rather, goes plain and in vain. The sound addition on the timeline pretty much goes unnoticed. The film certainly could have done with a background score. Lacking this only made the narrative seem dull and monotonous. However, it’s a good attempt at bringing comedy into the most unexpected scenarios and dealing it with deadpan seriousness!

'Johnny Colorado' Is The Interview Of A Lifetime!