A Story In Visuals: The Tale of ‘Aea’ 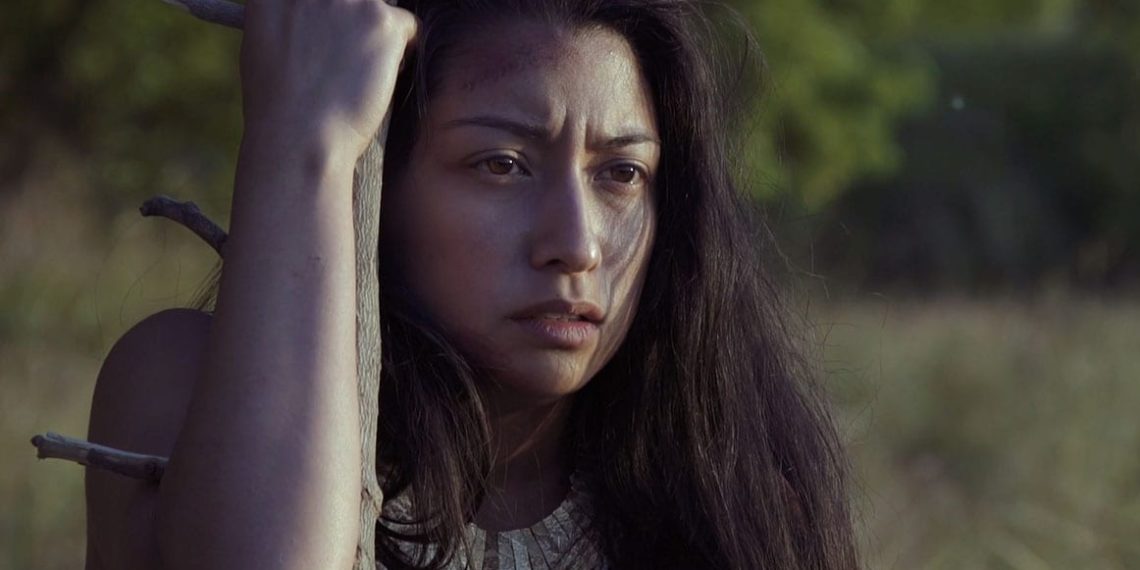 A Sumerian clay tablet from circa 2300 BC is the earliest known account of the Great Flood that destroyed everything it met, and it is immediately after this flood that Dustin Nowlin’s ‘Aea’ is set.

The eponymous heroine, played by Rachel Strongoli, is a Sumerian princess, her name meaning ‘house of water.’ She survives the cataclysmic flood only to find herself in an unforgiving new world where her royal status means nothing. There is both a sinister desolation to the land with the loss of human civilization and yet a natural everyday-ness in the goings on of the animals, as though the flood was meant for the destruction of humankind alone.

One of the early shots of ‘Aea’, also mirrored in another similar situation when Aea discovers an unconscious man, is striking for how the camera frames her in a tight close up that makes her appear as though separate from the land. The film uses flashbacks to reveal her life as the daughter of the ‘lugal,’ or king (Chuck French) – it is a charmed existence. Until the incessant rain brings on a flood of devastating magnitude and she is left alone, her entire family possibly dead. Aea begins to put her life back together, symbolically, as she puts on pieces of jewellery that she had lost in the disaster. Rachel Strongoli pulls in a decent performance though at times it is a little unconvincing. A bigger complaint perhaps is that during a flashback sequence, the camera is out of focus on her.

She finds a man (Nico Zahniser), perhaps on the brink of death, and here her resolve strengthens to live. She sets out to find sustenance for herself and the weakened soldier. In the process disaster strikes and Aea must either stand strong or face defeat, which in this case, means certain death.

The prosthetics used in the film are incredibly realistic, though the makeup could have used some finer touches. Music is used sparingly, giving the film a more real feel. When it is used, Mike Hovancsek and Lydia Snyder’s original score is fitting to the land and subtly leave the viewer feeling uneasy about Aea’s fate by its detachedness. The dialogue is sparse as well, relying instead on visuals to do the talking.

‘Aea’ is remarkable for how it tells a story with almost no dialogue, leaving you with eye-catching frames to mull over long after it is over.

A Story In Visuals: The Tale of 'Aea'

'Welcome Home' Is A Story That Goes Frighteningly Close To A Crime...