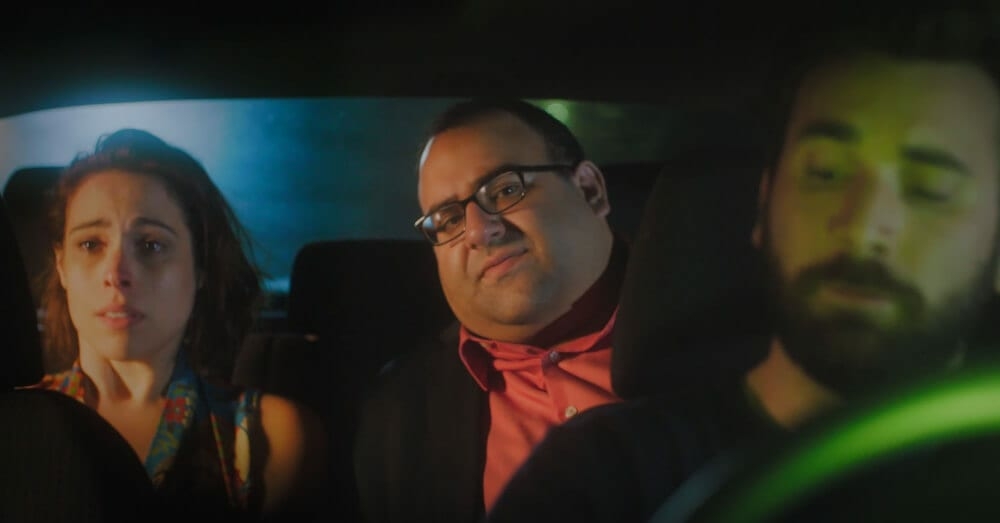 Its twilight and the door shuts behind them, drowning the cheers and laughter behind. Kate and David have just crossed a significant milestone in their relationship. Despite the early stages in their dating, David invites Kate to an engagement party to which she obliges. We witness their warming up to one another, the warm fuzzy feeling growing between them as they discuss, albeit cautiously of one another’s intent and future plans. As the date draws to a close and to an even more significant question; the destination of their night: whose place? We get the picture…

David (Jonathan Marballi) is the quintessential sweet guy women love to date and secure themselves with a ring. He is understanding, deeply sensitive and Marballi portrays him with a nuanced understanding of layered subtlety and telltale sensibility. Kate (Paige Lindsay Betts) on the other hand bears the semblance of a person who has burnt her fingers more than she could bear anymore. With a hint of caution, fear and yet aching eagerness, Betts brings Kate to life with relatable certainty. As the two kiss, their Uber ride shows up and director Matt Braunsdorf spins a wonderful tale of three individuals whose interwoven lives are serendipitously brought together with one shared ride.

Jonathan Marballi, who also happens to be the writer of ‘Uber Ex’ weaves a complex tale of the past confronting the present and future, exes reuniting with the foreshadowing of a prospective future alliance and being barraged with multiple choices across life’s crossroads. But, he does that with such casual referencing and ease that it never weighs on the viewers’ conscience. Instead, we become the co-passengers in this strange, yet relatable joy ride. The initial inhibition and reluctance to acknowledging their past soon way to open references to their bygone history. You see, the driver, Lev (Jeremy Michaels) and Kate were once lovers.

The beauty of Marballi’s writing is in the unpredictability he weaves in seamlessly into the plotline, without dramatizing it. The point where the awkward conversation steers to an alarming bend, as Kate grows too comfortable with Lev, leaving David asking her if she still intends to join him rings alarm bells in one’s mind. Granted all wouldn’t have had similar experiences, but at some point or the other, everyone would have had that one experience that brings them to the precipice of reluctance, ambiguity and confusion. ‘Uber Ex’ is all about that moment.

Andy Bond’s cinematography and Braunsdorf’s editing makes this 16:37 minutes long film an absolute delight to watch. Without giving away any spoilers, ‘Uber Ex’ is the thinking out loud of a woman’s mind. For those curious to know more, this film is an absolute must-watch!