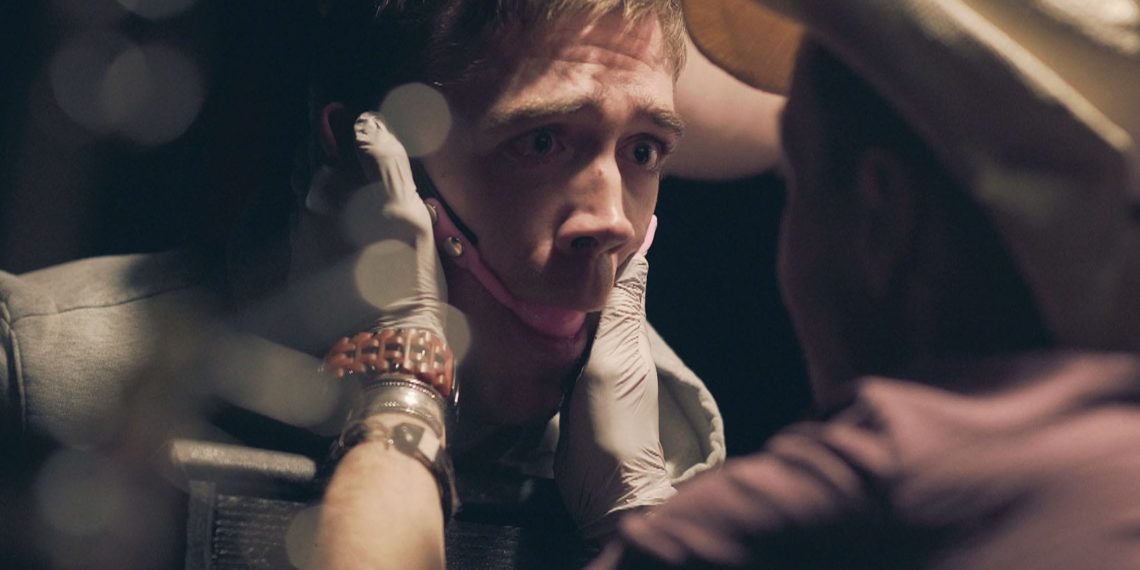 ‘Tutu Grande’ by critically acclaimed director Derek Sitter is a dark comedy based on the theme of consequentiality. The word that instantly conjures up images of karma and retribution into our minds has been played to the hilt by Sitter in this nearly 13 minutes long film!

The setting for Jared’s (Nathan Woodworth) comeuppance is dark to the point of it even coming across as primaeval. He is inclined to face down with hands tied on what seems like a torture device. And, right before his eyes are the various instruments of torment. Even in the dim setting of the light, the terror blazing in his eyes is unmistakable, as his captor Wayne Newcome calmly indulges him in a piece of literature.

It’s always the deathly calm, the silence, the softest chuckle that runs a chill down one’s spine in films like these. And, Sitter uses it to his narrative’s advantage here. When you see the chief of captors Jesse (played by Derek sitter) march in, and put on his surgical gloves with that unmissable suave, he paints a frightening image of himself and what he is capable of doing without even uttering a single dialogue. That’s raw talent and brilliant screenplay (Derek Sitter), at work.

The sheer buildup of the scenes, the play of the lightings used and the crisp editing (Taylor Morden) ensure the pace of the film to never be too fast or too slow. As the seed of despair and fright is both sown in, one can anticipate the unbecoming of the characters and yet hope for .

One of the most enthralling moments of the film is the dialogue exchange between the captor and captive. The interplay of words and experiences and coming to terms of what trauma means and leaves behind slowly starts to unravel the true dexterity at play. Indulging in mind games is one thing, but making your audience learn a thing or two about not only the characters at play but even about themselves is a huge feat in itself, which Sitter manages to effortlessly achieve.

Cinematographer Taylor Morden captures the scenes with finesse, letting the audience be a part of the ongoing trial. Likewise, sound designer, Rob Sanders does a fantastic job at creating the arc of this award-winning dark comedy, by giving the appropriate sound effects without punctuating overly with unnecessary musical jargon. Derek Sitter, however, remains the mastermind behind this short, doing a great job at the writing, directing and acting! It’s no wonder that the film has bagged several accolades and awards; including a nomination at the New York Film Festival!

Be it Woodworth’s performance or the unexpected turnout in the audience, the film carries several subtexts within itself, which only a serious cinephile would be able to decipher. Special shoutout to Jeanne Sanders who plays the mom and silently emotes her heart’s greatest tragedy in one poignant scene…

'Night Tide' Is A Reminder That You Can Run and Hide, But Jump Scares Will Always Startle You!