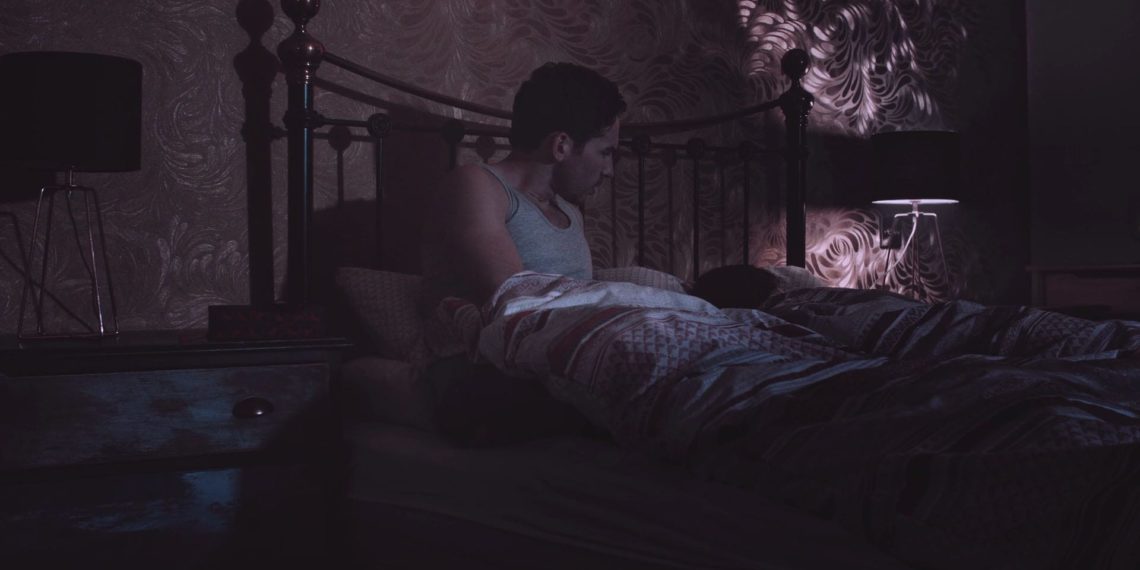 Someone keeps banging on the door in writer-director Richard Miller’s short; ‘Night Tide’ and we follow Ryan (Gavin Fowler) as he attempts to unravel the mystery; though it isn’t much of a mystery as the entire plot comes undone early on for the experienced viewer. That is not to say that it isn’t enjoyable, given the right mood and time of the night.

Ryan lives with his partner Amy (Bethan Sweet), who is more into her phone and a certain Sexy Phil than she is into him, and the strain on their relationship is evident on his face and gait. If that wasn’t enough, he is beset with a strange banging – not knocking, banging – on the door, which comes seemingly without a source, along with the strange sightings of a woman in white. Through all of this, Gavin Fowler remains a wooden-faced protagonist and not a reliable one at that. Since we do not know the extent of his unreliability, it is hard to interpret which events he is actually accepting of, and where it is only a subpar performance.

The jump scare tactics that Miller generously uses throughout the film are rendered rather dissatisfying owing to Fowler’s rather mild reactions. Then again, one does not know whether it is because he is already familiar and comfortable with the source of the events. The visuals of ‘Night Tide’ are pleasantly cinematic, although its camerawork falters. Cinematographer Grant Archer has his moments and delivers beautifully in them, but the film also contains scenes that are rather inexpertly handled.

The house and the grounds are a character in their own right and Archer uses them to their best effect. ‘Night Tide’s’ well-done scenes, combined with the entrancing score, create sincere moments of fear that make your spine tingle. The Beethoven needle drop though feels out of place – it does not seem natural for either the protagonist or the tone of the film. Sound design plays an especially important role in the film, and all things considered, it could have been better.

With all the makings of a conventional horror film, ‘Night Tide’ fits neatly into the category and will find many takers among fans of the genre, but few among those looking for innovation.

'Paid In Full' Is A Christian Drama On Hope & Faith