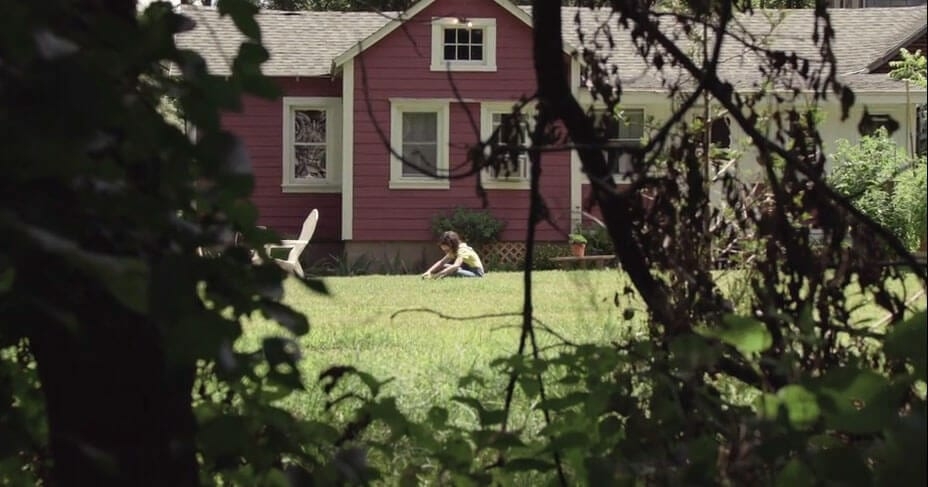 Witten, directed and produced by Robbie Lemieux, ‘The Woods’ is just a 4 minutes long, horror film narrated spectacularly through its frames and silences with bare minimum interaction between its characters.

It opens to a little girl, playing by herself in the garden. She is Charlie, portrayed by Maggie Stack. Her tiny little frame centred against the bucolic backdrop of the green; the isolation of a lonely figure cut alone is hard-hitting enough. Add to that, the eerie sound from the woods makes the scene even more gripping. Lemieux doesn’t waste time building the suspense or the mood of the film. With sweeping takes across the interiors of the cabin housed by Charlie’s mother and distant shots from the windows within, we see the mother and daughter duo against very natural and yet spooky settings.

The cinematic frames captured by director of photography Sancheev Ravichandran acts as a character in itself, breaking the fourth wall, playing the spy to its characters. We know little of the characters and whilst that makes it hard to invest in them, it doesn’t take long to establish the closeness of their relationship.

As Alison, played by Jeanne Schweppe prepares sandwich for her daughter, calling out to her, there’s premonition to the air. Call it the mother’s instinct, or the astute acting of the lead or Lemieux’s uncanny ability to hold the frames still where needed, the edgy spookiness of the moment is heightened. Much to her horror as she follows Charlie, whose non-response prompts her to step out of the cabin in the first place, sees her daughter being beguiled into the woods. The remainder of the film, although very limited in time is the horror of what she discovers when she follows her daughter, beseeching her to turn back.

It is Ravichandran’s cinematography that forms the heart of the film, with every frame and shot perfectly timed. It simply carries forward Lemieux’s vision to ring in a certain kind of horror that both; manages to intrigue and spook its audience. Not a single shot is wasted in exaggerated sequences or stretching of the scenes, which is wise considering the runtime of the film.

Cassady Tromba’s editing is crisp, bringing out some of the best transition scenes and composer Sean Leonard matches Lemieux’s narrative and maintains the ambience of the film which holds up until the very end. The film is beautifully crafted and with its open ending, leaves more questions than answers. Some might agree that ‘The Woods’ ought to have increased their runtime and provide more background story, but its nonetheless a well executed short with an interesting narrative and characters beyond the mother-daughter duo so strongly touched upon, that it leaves the audience asking for more…

'Lunchtime Is Over' Is The Much-Needed Break From Work Stress!