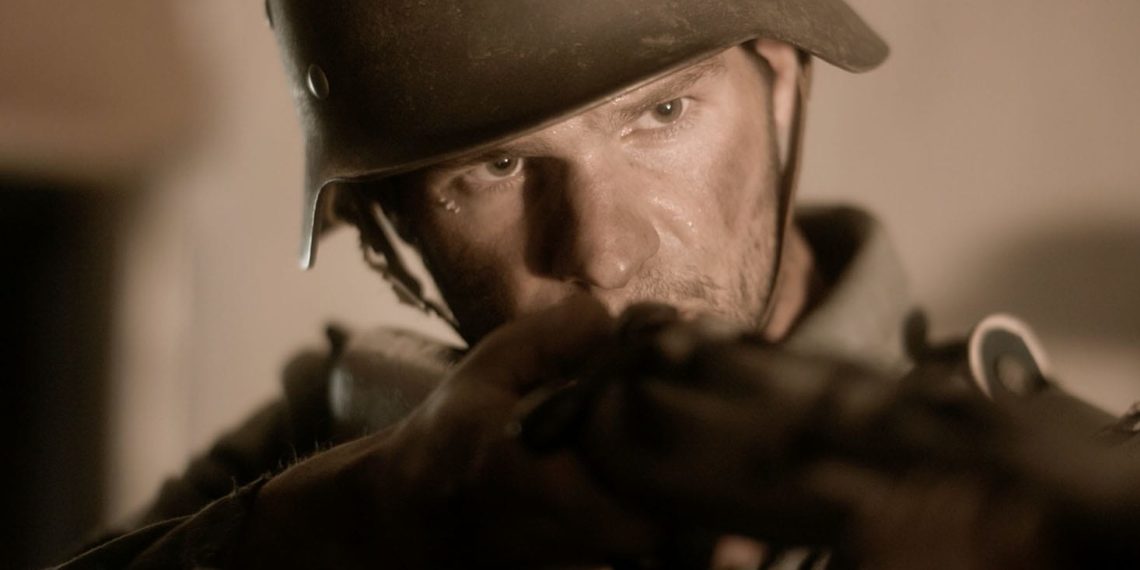 Set against the backdrop of the 2nd World War, ‘The Little Picture’ explores the dilemma a soldier faces even at the event of its imminent retreat. We witness the 1534th day of the Nazi German occupation of France: dated, 25 August 1944. The Germans have surrendered the French Capital. But, alas, this war, like every other has come with collateral damage. The innocent lives at stake aren’t hard to guess or imagine.

Co-writers Toby Kearton and Harry Stainer, explore Otto Helfrich (Jonas Grosserhode), a Nazi soldier whose conscience refuses to quieten down despite his reflexes. He has to make the righteous decision when confronted with two allied soldiers; and deserters at that. His pacifist nature which is constantly at loggerheads with the demands of the warfare is brilliantly portrayed by Grosserhode’s nuanced performance.

direction relies heavily on symbolism. For instance, shots of the Swastika implying of the German presence despite the war having ended or of the small bowl filling with just drops of water are cues to deeper subtexts at play. The film is an audio-visual treat of multiple connotations, in short.

Unlike other war-based films, take on the film is through the prism of a soldier’s ongoing fight with himself, between his duty and morality, his orders and his instincts and ultimately, between nationalism and humanity. And, the simplicity of the portrayal of the situations is deceptive to its true complexity, both in terms of character arcs and storyline.

Gabriele Fabbro’s cinematography is outstanding. His camera lens plays beautifully with the focus, alternating between right amounts of blur and sharp focus. Most of the shots are singularly close-ups and/or medium close-ups to highlight the emotional value. Additionally, the brilliant use of foreground and background gives the shots the much needed linear perspective. Fabbro sets to the daylight lighting tone using the warm hues of the daylight to the fullest advantage; giving an intense mood to the shots. All the actors from Marcos Diaz, Brandon Koen, Jonas Grosserhode, Benjamin Schnau, and Jonas (the young soldier) add to the rich tapestry of the story.

Co-editors Vladislav Nikitin and Joshua Marchitelli’s sharp scissors leave the film evenly paced at 15:31 minutes. The montage of the shots laid over with Ramesh Kumar Kannan’s soul-stirring music gives a wonderful synthesis to the film, which is based on the story by Harry Stainer.

‘The Little Picture’ explores the hidden, often neglected aspect of the war, the all-consuming and devastating effects of a war that despite its end, doesn’t quite end…

'Whirlpool' Is The Story Of A Man's Unspoken Pain...