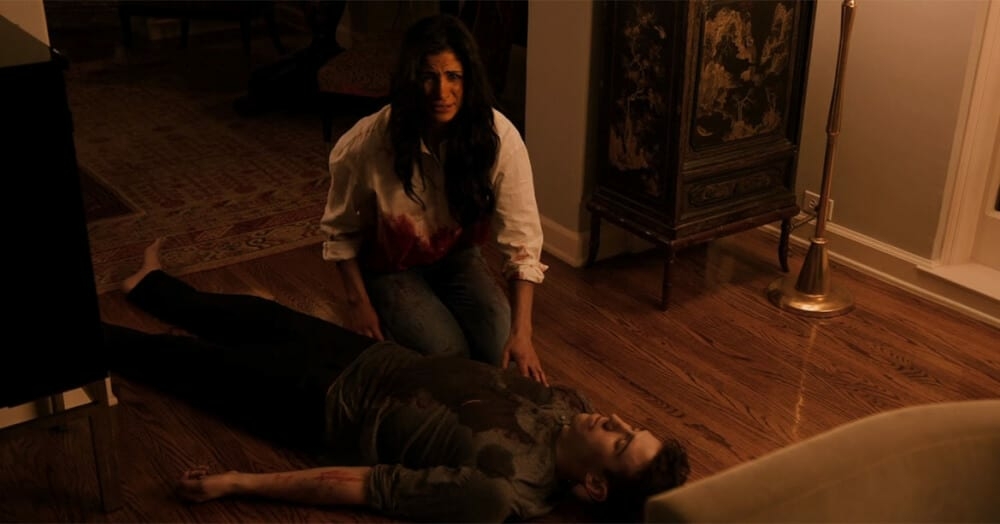 Directed by Blake Winston Rice, ‘People Like You’ is a suspense-thriller at the heart of a family drama. When an heir (Ford played by Josh Mayes) of the late billionaires, reaches his family’s Beverly Hills Estate, he sets off in motion a chain of events that come to define his will and inheritance. His entrance alone to the house marks an unsettling, albeit rich tone to the film. Add to that the dark tonal contrast with warm lighting used that befittingly offers the note of a thriller to follow is one of the many examples that can be cited to explain why ‘People Like You’ is highly unlike any other from its genre!

Ford finds a woman ‘Julia’, played by Gabriella Piazza, in his living room, standing, blood-soaked, next to a corpse lying on the ground. He takes a good look at her and the lifeless body lying still and sizes the moment. Her clothes, a clear indicator of her hand at the crime, Ford holds himself still for a moment until he plans the next step to be undertaken.

Despite the restrained and measured performance of Mayes and the visibly shaken Julia (Piazza), Rice quickly reaches the turning point of the film without wasting any time. Mayes, who also happens to be the writer here, reserves the climax to fully reveal the plotline while using the entire length of the narrative to build the suspense. But, Rice’s story reaches its spectacular heights thanks to Hilarion Bank, the film’s director of photography. The various camera angles used, the panoramic shots (drone pilots Jeremy Aikin & Nick Foss), the wide angles and bird’s eye view; all conspire to tell the audience of a great spectacle about to unfold.

Until the very last scene, the audiences are kept hooked to the story, not giving away so much as a hint to the character’s true motivation or capability. As fitting as it sounds, it’s only in the end that even the title of the film is justified. To that effect, editors Keith Jenson Matt Sarno ensure that the pace is breathable, although it yo-yos between being fast-paced and achingly slow at some scenes. At 17:28 minutes the film transitions effortlessly from the dark hours of the night to the daylight hours leaving behind a sharp effect against the mesmerizing backdrop of splendid locations.

Mayes adds layers to the already layered character of Ford. The fine line that would have very easily made Ford into a stereotype is well avoided. While on the other hand, Piazza as Julia, is terrific, to say the least. Not only does she emote the myriads of thoughts running through her character’s mind with effortless ease but also adds subtle streaks of unexpected surprise into her character’s personality.

‘People Like You’ holds an interesting storyline with an even more interesting narrative to fall back on. And, with a compelling background score presented by Dillion M. DeRosa (sound by Miles Cooper) and stellar acting by the lead pair, it’s hardly a surprise that the film leaves behind such a lasting impression. Watch out for the last scene, where the plot finally comes undone and the glorious visual shot that paints the screen into an exotic optical illusion that leaves the audience gasping for more just as Julia does!

‘People Like You’ is challenging, provoking and an audio-visual treat to those who consider movies to be beyond just entertainment.

‘Success’ Redefines Sacrifices Made To Get To The Top...