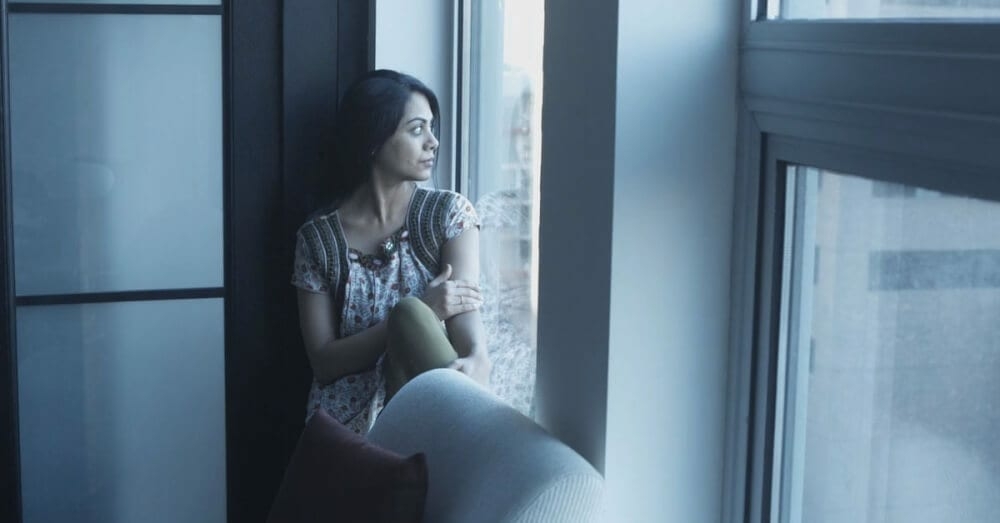 Raashi Kulkarni’s soulful composition plays at the backdrop as someone calls out her name; and we see her. Standing meekly by the window, looking into the distant horizon, with thoughts far too deep to delve into and yet too simple to divulge, as shared by million others, she is Geeta. Director/Writer Sohil Vaidya’s weaves an emotional drama on the illegal trafficking that brings 15,000 people to the American shores as forced labourers, all through the eyes of Geeta…

Komal Daga who plays her (Geeta) remains the nerve centre of this 15:40 minutes film, through which we not only transverse into the plush American dream often sold to the “developing” countries, but also trespass into the lives of one “well-settled” Indian couple, who hire Geeta as their house help. Away from her family and little sister she adores, Geeta is initially both; overwhelmed and consumed by the high rises. Whilst the work home keeps her engaged, it doesn’t take long to realize that despite all the comforts, she is caged; albeit it’s a golden one. Keshav (Kapil Talwalkar) and Monica (Shefali Deshay) are living the American dream most from select countries aspire for. Their lifestyle well showcased through their apartment wings requires assistance and in comes Geeta. Convenient as it seems to all, she comes from a background with limited means and has a younger sister dependent on her.

This is sadly the truth, the case in most homes that are living below the poverty line, where the only escape route available is to forever kiss goodbye to one’s dignity and identity and become a faceless, nameless entity in somebody else’s life. As Geeta goes about learning and adjusting to her new life, the mutual distrust between the employer and the employee evident, the story is discomforting and makes one feel uneasy. The characters are well written, although there’s very little predictability to their arcs. Vaidya’s direction is particularly interesting, extracting the best of performances from his cast of just three. The screentime equally shared between them all, Vaidya ensures that even their silences emote.

When it becomes clear that this American dream is far too costly to live with, Geeta decides to go back home. Coming up with a poignant, touching expression of her true reality as the imprisoned individual, she decides to seek the help of the maintenance woman, who happens to be the only interaction she ever has outside of her employers. But, just as fate would have it, she is confronted with the grim reality of what her bondage would offer her family back home in return. Will Geeta find it in her to break the shackles and get home free? Or will she like the countless others succumb to life’s numerous tests?

The casting is brilliant, the pace of the film steady under Sikandar Sidhu’s able editing and the background score fitting. Vaidya uses the simplest of props to evoke such a strong emotion that it becomes hard not to be affected by it. As the film draws to a close, it becomes hard to miss the cyclic narrative as we see Geeta standing at the very same window, meekly, this time, however, resigned to her fate.

‘Geeta’ is a testament to the collective injustice that exists in the society and how even the educated, well-informed individuals of the so-called modern and developed world remain entrapped in it, much like Geeta herself…

‘Threshold’ Will Sob You Out With Its Tragedy!

'Herringbone' Flips The Spotlight On To The Audience